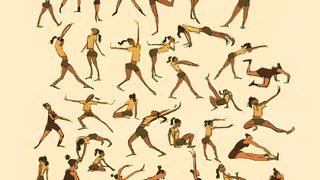 As an artist, many of us are drawn to expressing ideas through character design. I’m constantly seeking to improve, and over the years I’ve picked up some helpful tricks in designing more appealing and expressive characters. It’s important to design not only how your figures look, but also how they tell a story with their gestures and movements.

This is especially crucial in the animation industry because the characters you’ll be conceptualising are intended to perform as though they were an actor in a film or TV show. Here are some tips on how to draw a more engaging character.

Envisioning a single line overlaying your drawing can be a simple way of creating a feeling of movement. This line of action can either be straight or curved; both can give a different feeling of movement. While a straight line is usually very fast and direct, a curved line can create a more graceful mood. However, it’s best to avoid a perfectly straight vertical line of action, which may make a drawing feel static.

02. Show what the character is thinking

Just as we imagine our favourite TV and film characters to be real, we should try to imagine the characters we create have minds of their own. If a character in a drawing is moving or acting, they should have a reason for doing so.

Whether it be a broad action such as sprinting or a subtle mannerism, such as twirling a strand of hair, the character being presented would most likely have a conscious or unconscious reason for doing so. Keeping this in mind will help you make your character feel more interesting and relatable.

Curves are generally used to suggest the more fleshy part of the figure, whereas straights are more commonly used to imitate stable and solid segments. For example, compare the use of a straight line for a character’s back and the soft curve of their stomach.

Drawing from life is an extremely helpful observational tool, whether it’s in a classroom or at your local café. Sketching and observing people around you can be beneficial in learning how to draw the human figure and the many emotions it can exhibit.

Alternatively, there are life drawing classes. These tend to consist of a mixture of lengthy and short poses – poses set over a longer period of time enable you to capture details and study human anatomy, while quick poses are better suited to the gesture drawing technique (see below).

Gesture drawing is a quick way to capture the overall message of a figure. These observational drawings are often done in very short segments – in a life-drawing class, the model may only pose for 30 seconds, forcing the artist to get their first impressions down on paper.

In this process of making deliberate and quick lines, try not to worry about how your art looks, or capturing details. You want to focus on the action or feeling of the pose.

The use of different shapes is a major tool in character design. As well as helping to convey personality, shapes can also suggest movements or emotions.

A character made up of squares may feel more slow and stable, whereas one made up of triangles may give off a more excitable feeling. Circles or curves are often used for more likable characters, and can make them feel friendly and bouncy.

A simple way to create a more dynamic pose is to practise using tilts and twists. To help avoid a static pose try using different angles. For instance, the angle of the character’s shoulders could contrast with the angle of their hips. Instead of drawing with angles that are parallel, contrasting angles give the drawing a feeling of flow and rhythm.

As one of the 12 principles of animation, 'squash and stretch' is a useful technique in giving your drawing more life and energy. In animation a squash is often used as anticipation for a broader action: the stretch.

The same can be used in a static drawing: A stretched pose acts as a moment when the character is creating their broadest action, while a squash in a drawing suggests tension.

Next page: read on for more tips to bring your characters to life...