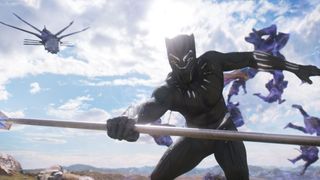 Black Panther has become the fifth Marvel Studios movie to cross the $1 billion global box office mark. “It’s unbelievable that the world has such a huge reaction to a film and I can’t help but feel proud to be part of it,” says Method Studios associate VFX supervisor Todd Perry.

“It was clear that Black Panther was going to be different just by reading the screenplay. You have the African side of things but also the component of strong women. There are no women on the sidelines who are strictly love interests. We knew that it was going to affect certain demographics harder than others but when the first trailer came out the world went bonkers; that was the first indication of how big this thing was going to be.”

Serving as one of the main vendors for Black Panther, Method Studios was responsible for 410 shots with the bulk of work taking place during the third-act battle as well as creating digital doubles for the title character and Erik Killmonger.

A reference bible was assembled by the film production team and presented to the visual effects companies. “We used that as a go-to manual,” says Method Studios VFX supervisor Andy Brown. “It gave us an overview of Wakandan culture, from architecture to a map of the country to the history of the vibranium mine, how Mount Bashenga was created and what vibranium would look like in its different states.”

Neither director Ryan Coogler nor cinematographer Rachel Morrison had dealt with extensive visual effects shots before. “Geoffrey Baumann, our production visual effects supervisor, focused on the previs in the early days and showed Rachel plates versus the final shot from previous Marvel movies. The previs continued throughout the show because there were changes to the design and story. We had quite a big reshoot for part of the third act as they wanted to amp up the action for the battle sequence.”

At one point in the film, Black Panther tackles Erik Killmonger, causing them to fall into a mineshaft. “It couldn’t be dark, dank and grimy,” says Perry. “It had to look like somewhere people would work because Wakanda is an advanced civilisation. The animators went for an approach where the cameraman skydives at the same time as they are falling.”

Vibranium in its raw form is a dark colour like the outfits of the two adversaries. “We were playing with silhouettes of Black Panther and Killmonger a lot so had this vibranium river seam at the bottom of the mine that emitted a blue light, and used the idea of another shaft that daylight would come through from the top,” explains Brown. “Then we had more localised light sources from this vibranium train station which gave us the opportunity to put in some bright, warm tungsten lights to give it a bit of contrast. We used a lot of atmospherics to pick out the silhouettes as well.”

Digital doubles were created from a daily routine. “When an actor wrapped he or she went to the photogrammetry booth and got scanned,” notes Perry. “We had all of this reference for different outfits in various states such as Okoye, W’Kabi and Shuri. Marvel sent us the costumes so that we could take more photography and it also gave the modellers something tangible to work with.”

The suits of Black Panther and Killmonger were built by Method Studios and shared with the key vendors. “They did shoot the Black Panther suit with the new design on set but it had to be replaced because of wear and tear,” remarks Brown. “Some design components changed as well.” The nanotechnology transformation effect was created within Houdini with the primary directive being to follow the design patterns in the suit.

“The suit creates itself from the necklace that T’Challa wears around his neck,” states Brown. “Every time Black Panther gets hit energy is absorbed into the suit. You see all of this purple energy from every impact of a spear, bullet or sword; he can then release that energy as a big spherical pulse.” A silver suit was also worn underneath the costume which shows through, allowing for muscle definition.

For the third-act battle an effort was made to correct one master rather than art direct per shot. “We had different levels of detail because we had high, wide aerial shots and also had super close-ups with plate in the foreground and rhinos running toward us,” says Brown. “We got down to the grass and shrub-level detail in some shots which required tweaks.”

The big rethink came later on when the decision was made to amplify the fighting. “We had to triple the amount of characters on the battlefield and introduce another two rhinos.” The background confrontations consisted of crowd simulations while fight vignettes were put together by the animators for the midground. “We asked for a bunch of b-roll footage and animators used it as a guideline, because each tribe had a different style of fighting that was all worked out by the stunt team,” states Perry. “It was generally broken up between what was happening before Black Panther tackles Killmonger and what happens afterwards.”

Taking part in the battle are the protectors of Wakanda known as the Border Tribe, which uses super-strong blankets made out of vibranium threads that can generate holograms. Every Border Tribesman is given a baby rhino and grows up with them. “W’Kabi’s rhino is a big one,” notes Perry. “Then there’s a couple of other rhinos that are running through. They’re a bit bigger. The facial features are like a white rhino which have these wide lips, while the black rhino has a beaked lip structure that they use to eat leaves, so ours became a hybrid.”

Each rhino has distinct characteristics. “They are different in their structure, size, colouring and horn design.“We took a lot of guidance from Rachel Morrison’s photography and she likes a shallow depth of field. There was a lot of, ‘What is the story of this shot?’ Anything that is a distraction from it would usually go or would need to be pushed to the background.”

A lot of dust was generated by the combatants. “You have to make sure that you clear out the areas that you want to be seen. When the Dragon Flyer is firing and creating explosions we were timing those with the animation of Black Panther running through them. All of that is choreographed down to the beat so that you don’t lose the audience in what you’re trying to do.”

Method Studios created the Talon Fighters and Dragon Flyers. “There’s a section in the Wakandan bible which talks about incorporating designs from nature into the vibranium technology,” states Perry. “The Dragon Flyer has an x-wing pattern like a dragonfly. If you [stand] the Talon Fighter up and spread the wings out, it resembles an African tribal mask. Everything fit into place appropriately and things would move out of the way to make clearance for other things that were articulated. There was a lot of attention put into the functionality of these models.”

A problem emerged when the final battle was being assembled in editorial which required a fix late into post-production. “Agent Ross helps out by remotely piloting the Royal Talon Fighter to try to stop the vibranium weapons from getting out of the country,” explains Perry. “In order to provide a sense of danger to him, they came up with an idea of a Dragon Flyer starting to blast its way to the lab as he is piloting. That shot didn’t get conceived until December and our first animation pass was in mid-December, so we had four weeks to put that whole sequence, and it wasn’t just us. It was shared between us, ILM, Cantina Creative, Ghost and RISE because we all had different components that contributed to the shot.”

A practical seat was built for Martin Freeman who portrays Agent Ross. “Everything else was made up in the sequence. We already had the lab built, the mineshaft and Dragon Flyer were also ours but the heads-up display of Ross flying through Golden City was ILM. ILM had to render the cameras and provide them to Ghost which put them inside this hologram of the ship. That ship would be put in our environment and Creative Cantina created the heads-up display graphics. RISE did a number of the shots too. All of that had to come together to deliver the final shot. That being said it makes the movie better and more exciting.”

This article was originally published in 3D World, the world's leading 3D and VFX magazine. Buy issue 234 or subscribe here.