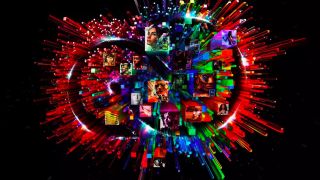 If you’re new to Adobe’s Creative Cloud on Windows, we’ll explain everything you need to know in this piece, whether you're used to using the software on a Mac or you're a totally new user.

Creative Cloud is the collective name for Adobe’s suite of software apps for graphic design, web development, photography and video editing (among others). There are over 20 apps in the suite, though it’s very unlikely you’d ever need them all in one go. It’s a subscription service, meaning that for a monthly fee you can get access to all of the Creative Cloud apps.

You can also access only some of the apps should you want to – see more on this below. Adobe’s offline software suite was previously called Creative Suite.

How do you install the Creative Cloud suite on a PC?

The Creative Cloud desktop app is the key part of the suite on Windows – simply download it and you can then install the various apps from there. It’s divided into categories in the desktop app, so you can see the apps that will be most relevant to you - you won't need the whole lot and the full list can be quite daunting.

What do you need to run Creative Cloud on Windows?

You’ll need the 64-bit version of Windows 10 to run the Creative Cloud desktop app – if your PC has been made in the last decade, it’s likely it will be a 64-bit machine, but you can check by right-clicking on the Windows logo in the bottom-left of your taskbar and going to System.

There you’ll be able to see what version of Windows you have as well as if it is 64-bit or not. There is an older version of the app – also compatible with Windows 7, 8 and 8.1 if your machine isn’t able to run the latest version.

The requirements for the different Creative Suite apps are vastly different, but the software is able to scale well depending on what kind of system you have. Crucially for Photoshop, for example, you’ll need to be running at least Windows 7 64-bit and have an Intel or AMD processor clocked upwards of 2GHz, at least 2GB of RAM – though Adobe recommends 8, as do we.

What are the key Adobe apps?

As well as Illustrator and Photoshop, there are some other key apps for designers. If you regularly design apps, there’s Adobe XD for user interface design and prototyping (using associated XD mobile apps).

Adobe InDesign is the industry standard for page layout, while Spark enables you to create social graphics, short-form video and visual stories for brands. Also, we all need to handle, create and process PDFs from time-to-time even if we don’t work in print, so the suite boasts Adobe DC so you can complete any PDF-related task you need.

Then there’s Adobe Bridge. It’s a crucial element of the suite that handles all your assets so you can preview, organise and edit all your documents in the various Creative Cloud apps. Assets are easily found with powerful search filters, while it’s also able to bring your local storage together with any network drives.

There’s a full list of all the Creative Cloud apps on Adobe’s site, of course, including all the audio, video editing, web, motion graphics and photography apps you also get access to with a full Creative Cloud subscription.

What Creative Cloud plans are available?

There are four main Creative Cloud subscriptions, but they’re not that flexible. The first is an all-apps subscription that will give you access to everything for $53/£50 a month. Then there’s a version of that subscription that adds access to Adobe Stock for stock images (up to 10 images a month) costing $80/£79.

You can subscribe to a single app – which is quite an expensive way of doing it, since that costs $21/£20 a month. But if you really do need Adobe Illustrator and nothing else, there is that option.

Finally – although this won’t be much cop if you’re a designer – there’s a $10/£10 Photography plan that gives you access to Adobe Lightroom and Adobe Photoshop as well as some online photo storage.

If you’re involved in education in any way (as a student or teacher) you can get a discount on the software.

What are the main keyboard shortcuts?