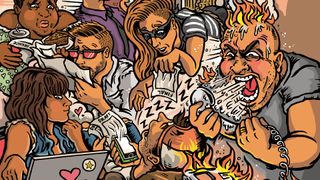 Whether you're a jobbing designer or an art director, sooner or later you're going to run up against an actual client from hell. They might start out all sweetness and light, but it's only a matter of time before they show their true colours and start messing you around, demanding endless revisions of your logo design and proving reluctant to pay up.

We asked some designers about their client from hell experiences and how they dealt with them; here's what they had to say.

"I had a client who expected me to be available at odd hours and was kind of demanding," says Erika Rains DeBlasi from Advisor Expressions. "The tipping point was when I saw him at Whole Foods as I was on my way to be induced. We stopped to get a few snacks to have at the hospital after the baby arrived. I had notified all my clients and put someone else in charge of the accounts. When we ran into him at the store, he starting immediately taking to me about work, even after I reminded him that I was on my way to the hospital. I knew then I had to fire someone who couldn't show me any respect or consideration. It wasn't worth it."

"I was bizarrely commissioned to illustrate mathematically correct stretches for people who'd had a hip or knee replacement, despite my style being built on the imperfect," recalls illustrator and writer, Ben Tallon. "It took days. Recounting this whilst trapped in a large, silent meeting room with a new prospective client, I explained how I'd once illustrated stretches for 'nip replacements.' She didn't acknowledge my howler. I became David Brent, staring into the void with tearful, glassy eyes."

@ComputerArts My client from hell is my #bossfromhell Makes Trump look like a cute fluffy bunny. He would think that a compliment #VapidJuly 27, 2016

"A European stationery company said they loved my work, and commissioned me to design a new range," says illustrator and artist, Rod Hunt. "I insisted on a 50 per cent fee deposit as they were a non-UK client. They briefed me, but then didn't like the work I produced. The brief then changed several times, becoming: 'I'll know it when I see it.' I produced more drafts, then several versions of artwork and eventually created something that didn't feel like me but they liked. They then changed their minds, refused to pay the balance of the fee and stopped answering my emails. It was a good job I had insisted on a deposit otherwise I wouldn't have been paid at all for my time."