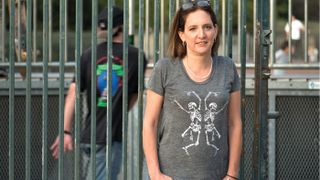 These days, most people know Jaime Levy from her book UX Strategy: How to Devise Innovative Digital Products that People Want, which is widely regarded as the definitive work on UX strategy, and published in six different languages.

But there’s much more to the American author, university professor, interface designer and UX strategist’s career to date. Here she reveals how she started out.

It all began back in 1990, when she was working on her Master’s at New York University (NYU) in Interactive Telecommunications. It was an exciting time, she recalls.

“I was surrounded by people who were trying to really push technology. Even back then we were doing stuff with virtual reality, reading cyberpunk books... It was a really good time to get fully engrossed in a mindset where ‘Hey, I’m not going to be afraid of technology even though I’m a girl, even though I’m not a programmer,’” she says.

Despite being born in Hollywood and going to college in San Francisco, Levy had had no interest in staying put in California. “When I left San Francisco, it still felt like a hippy-dippy scene,” she says.

“Apple was starting out but it was floundering. Silicon Valley wasn’t anything like it is now. So I moved to New York because that’s where artists lived who wanted to make a big statement, and I could be part of a scene that had so much energy.

“If you look at film, say, it was the lame Hollywood films that would come out of California, while New York had the people I admired, like Jim Jarmusch or Spike Lee,” she continues.

“A big reason that drew me there was that it had experimental industrial music, so I wanted to live where Sonic Youth lived. People like Patti Smith or Allen Ginsberg... it was like, I can do anything because these are the people I’m surrounded by.”

Taking a deep dive into the latest technologies, Levy soon became known for launching the electronic magazines Cyber Rag and Electronic Hollywood, which were programmed in HyperCard and Macromedia Director and distributed on 800k floppy disks.

“And I quickly learned that it’s one thing to make something, but that’s only half the game,” she says. “The second half is you have to market the shit out of it to get it in people’s hands.

So she lugged her disks around bookstores and worked incessantly to create publicity for them. “I sent them to magazines and they wrote articles about them. I took them to bookstores and said, ‘Sell these’. And they said, ‘What the hell are they?’ I said, ‘Just take them for free and if you sell them, give me the money.’”

After Billy Idol bought one of her disks in a bookstore, Levy got a gig with EMI Records, where she designed, animated, and programmed the first commercially released interactive press kit for the singer’s Cyberpunk CD digipack.

It was just one of a number of multimedia projects Levy produced throughout the 1990s, working with companies like Viacom and IBM, at the same time as working as a Professor at NYU, teaching Electronic Publishing and Interface Design.

By 2000, the dotcom bubble had well and truly burst, and then another seismic event, 9/11, sucked the creative air out of New York. Levy decided to move back to California, where she would eventually start a whole new chapter in her career by founding JLR Interactive. The UX consultancy firm, which Levy now runs alongside teaching UX strategy at UCLA, has gone from strength to strength.

In 2018, Levy says she's going to stop touring to focus on developing new courses and hands-on consulting projects, meaning that net's Generate London conference may be the last chance you get to see Levy talk in public for some time.

The full version of this interview was originally published in issue 297 of net magazine. Buy it today.

Jaime Levy will host both a workshop and a talk on UX strategy at Generate London this month. Haven't got a ticket yet? Grab one here now!