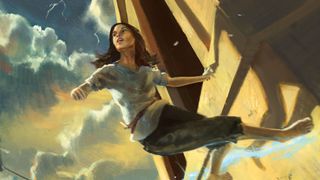 There's been a lot of talk about filter bubbles and echo chambers lately, but these don't just apply to politics and online: anybody can become stuck in an echo chamber – and that includes artists. If you were surprised by Brexit, or the US presidential elections, then you'll know first-hand the limiting effects of being surrounded by those who share the same views as you.

"It's a problem that impacts artists with different severity," says concept artist and illustrator Carmen Sinek. "Some people know what they like and are happy doing just that. Others lock themselves into a certain style early, for the sake of pursuing a career with a certain company or genre."

It usually happens, Sinek says, when artists start focusing on the product instead of the process. "They set out with a goal in mind – working for this company, or emulating that artist – and slowly begin to build their art education around it.

"If an artist wants to work for Magic: The Gathering, they might follow Magic artists online. The tutorials they see and resources they pick up, such as digital brushes, will likely be used by those who work within Magic's semi-realistic style range. They build a social media echo chamber around a very small part of the art community, and it becomes more difficult to move outside of it."

The risks of living in a bubble

At an industry level, one of the most immediate consequences of this is artistic homogenisation. For a while, many big video games and films had very similar aesthetics, points out Sinek. "Year after year, waves of students came out of the top art schools with extremely similar styles and design tastes," she says.

At an artist level, the consequences can be more harmful. Restricting your creative range can lead to dissatisfaction and depression – and limiting your views can be even more destructive. "I've seen too many artists clinging to harmful views on sexism and diversity," says art director Paul Canavan, "ignoring valid criticism from the affected parties and making the industry less appealing for many people.

"On a strictly artistic level, there are also a number of artists, mostly students or those relatively new to the industry, who decry the use of photos, 3D or any other 'non-traditional' techniques in illustration or concept art work, and take it upon themselves to spread this weird message around social media forums. I think subscribing to that elitist mentality is pretty harmful, and it's a place that I will try to engage in discussion."

So why are filter bubbles so tough to pop? The reasons are three-fold: first, you might not realise you've fallen into a bubble. Second, social media is built upon the idea of 'following' people whose work or perspective you like. And third, when you're doing a lot online, algorithmic filtering serves to reinforce your preferences on the basis of past choices of online content.

The more personalised our online experiences become, the more segregated and siloed our views.

"The result is an automated population of news feeds, search results and so on, with content automatically selected if deemed as in keeping with those previously recorded choices," explains media and communications expert Dr Dan Mercea, who's a senior lecturer in sociology at City University London.

However, as Mercea points out, it's not all bad: the more diverse those choices, the greater the variety of filtered content. "The algorithm will adjust itself as it tracks our surfing histories, so the filtering becomes more intricate as we make more information available about our preferences. So if we expose ourselves to diversity, the algorithm will reflect this choice – at least temporarily."

And it's the same in real life. Beating a bubble can be as simple as watching a video or reading a blog from someone with a different opinion, says illustrator Jason Rainville.

"There's a difference between living in a bubble and being confident of your point of view, though. And you don't want to be so open-minded that your brain falls out," Rainville says.

Sinek agrees that doing something outside your comfort zone is a good way to pop a creative bubble. "Dig out your art history book and start going through it, or enroll in an art history class somewhere. Find a place to learn where you will be exposed to a wide variety of artistic movements and styles, not just the ones you pick to research on your own."

"Be open to different opinions and encourage dialogue," adds Canavan. "There are a ton of controversial, oft-debated topics around the art community. Getting involved, sharing your opinion and trying to take something away from every encounter is super healthy."

And that's the point: there's a difference between being part of a community and being stuck in a bubble. Debate, discussion and the exchange of ideas can propel your practice to new levels.

"There's something to be said for surrounding yourself with like-minded people who can push the sort of content you enjoy into your eyeballs every day and a sense of community into your life," reasons Canavan. "In an industry where many of us work remotely, that can really help."

This article was originally published in issue 154 of ImagineFX, the world's best-selling magazine for digital artists – packed with workshops and interviews with fantasy and sci-fi artists, plus must-have kit reviews. Buy issue 154 here or subscribe to ImagineFX here.