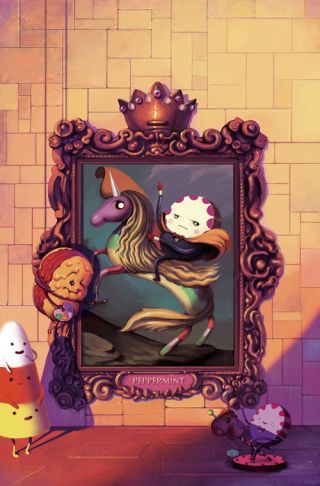 Creating fan art is a popular way for artists to show their appreciation for a subject they love. You only have to glance at sites like DeviantArt or ArtStation to see plenty of inspiring tributes to pop culture icons. Reimagining famous characters is more than just a good way to keep your artistic skills sharp, though. It can also give your portfolio the leg up it needs to grab attention in your chosen industry.

One of the main benefits of your fan art being noticed by a studio or another big client, besides the reassuring confirmation that what you’re creating is worth your time, is the prospect of being paid a handsome sum for your work.

This also flies in the face of the idea that fan art is somehow of less value than other genres – those hours hauled up in your studio working on Game of Thrones portraits won’t be seen as such a waste when the show’s producers commission you to create art for the premiere of the next series.

Here we talk to some artists who have forged careers from their fan art, and pick up some tips for how to draw art that will pull in commissions.

Bannon Rudis found Netflix knocking on his door to create promotional art for the second series of Stranger Things after some fan art he posted on Twitter was shared by David Harbour, who plays police chief Jim Hopper in the show.

“It kinda snowballed from that point and popped up on a bunch of different sites,” says Rudis. “Netflix's advertising partners got hold of me via Twitter about a year later.” Rudis was one of eight artists picked to represent an episode from the original series as part of an Instagram marketing campaign. He was lucky enough to be landed with episode six: The Monster.

“I decided to make 8-bit animation shorts for them that looked like a potential real Stranger Things game, since all the characters and backgrounds were made like actual game assets,” explains Rudis. “There were three shorts in total and a couple of title cards.”

While Rudis had to wait a while for Netflix to get in touch, Fellipe Martins had a much quicker turnaround when he posted his tribute to Adventure Time’s Marceline on Tumblr. “One day later after I posted it, [the show’s creator] Pendleton Ward shared it on his Cartoon Tumblr.”

Martins is no stranger to his fan art doing the rounds. His first piece of digital painting back in college was a piece of Super Mario fan art that ended up being featured on the likes of Kotaku. “The fan art piled up with Links and Megamans, until I got my first job as a concept artist in 2007.”

Jumping on the success of his Marceline illustration, Martins quickly got in contact with the editors from Boom! Studios, who are responsible for all the Cartoon Network licensed comics, including Adventure Time.

“They saw the fan art, saw my portfolio at the time and I was offered to illustrate a few Adventure Time comic book covers, then Regular Show covers, then Steven Universe covers,” says Martins. “Eventually I illustrated my own Amazing World of Gumball comic book story. I believe I have a Bee & Puppycat script laying around here somewhere, too.”

One of the most exciting parts about putting fan art out there is watching it grow and attract an audience. This happened to Claire Hummel when she started posting her historical Disney princess series online back in early 2011.

“I posted Belle in a 1770s version of her gold ball gown to all the usual venues (DeviantArt and Tumblr were probably my biggest communities at the time), and it immediately took off in a way I hadn’t seen before,” she explains. “As a result I expanded it into a series, and by the end of 2011 I had churned out about ten princess in their respective historical periods.”

Then in May of 2012, Hummel got an email from Irrational Games studio out of the blue, asking if she’d be interested in doing character designs for BioShock Infinite. “They cited the historical princesses when we initially talked over the phone, saying that they specifically wanted to bring a more historical eye to the characters,” says Hummel.

“I was a huge fan of the original BioShock, my boss at Xbox at the time gave me the go ahead to take on the freelance, so I said yes!”

There might have been a clear path between Hummel’s princess series and landing work on BioShock Infinite, but for Dan Mumford it hasn't been quite so clear cut. Instead, it was exhibiting his art in various group gallery shows that led to new projects and calls from clients who saw the work.

His trajectory has never quite been a straight line, and he’s become used to waiting months between projects – but his technique did win big eventually. “My work with Gallery1988 led to me creating four posters for Disney and the release of Star Wars VII: The Force Awakens,” he recalls.

“This has been the case with quite a few projects. Getting involved with big group shows at the more prominent pop culture galleries is a great way to get your work noticed. A lot of people are paying attention to those lineups and the work that gets created.”

Back up fan art with substance

While fan art can be a useful hook to grab people’s attention, Hummel is keen to point out that what really makes artists stand out from the crowd is having their own distinctive creative flair. “I think it’s pretty rare that employers are looking for people to draw what they already have,” she reasons.

“Fan art is a hook that can get the attention of employers, yes, but you still have to have a lot of substance to back it up,” she adds. “Part of that can be the content in the pieces themselves – in my case with the princesses and Irrational, that was appealing costume design and extensive research into historical fashion – but I still had a portfolio and resume beyond that series to support my case.”

Martins agrees that while his Marceline fan art gave his freelance career the sparkle that it needed to lift off, without a strong portfolio to back it up, the art would just be a viral image.

“You need a strong portfolio – and that's it,” he says. “Fan art drives the attention of a broader audience, which means that creators might see it as well. When luck knocks on your door – and it will – make sure you are ready. You can only be sure with a strong portfolio to make that first contact. You also need to practise to keep up with the demands. If you are serious about it, be ready.”

So, if you’ve got a killer portfolio that just needs to get seen, a juicy piece of fan art, shared smartly, can attract a lot of eyeballs. But how do artists set their fan art apart from the noise on social media?

“If you want to get noticed, honestly, do what is popular,” says Rudis. “Look up popular hashtags to see if anything in that top ten that's trending is something you love. If so, hop on that train and get to drawing.”

Drawing for the likes and retweets is all well and good, but Hummel warns against artists trying to make their break by sharing fan art via social media specifically. “A watched pot never boils and all that – so a watched fan art tweet never gets retweets, I guess.

“I do, however, think that challenging yourself with how you approach fan art is a great way to make the process more satisfying, and to make the resulting art more unique and compelling. It’s a win/win!”

Draw what excites you

Mumford falls somewhere between Rudis and Hummel. “There are many great ways to get your artwork out there, but creating fan artwork for something popular is certainly going to get the attention of people, and if that leads to people seeing more personal work then that’s fantastic,” he says.

“At the end of the day, creating good artwork and putting it out there will get you noticed.”

It seems that the reputation of fan art has improved over recent years, with studios keeping their eyes peeled for interpretations with a fresh twist. Martins puts this down to brands such as Blizzard wanting to develop strong communities around their products.

“They encourage fan artists and cosplayers to participate, even hiring them from time to time,” he explains. “In any case, a good art piece is always a good art piece, be it original or fan art.

“From a personal point of view, do what your heart desires,” he adds. “There should be no barriers to what you want to create.”

This article was originally published in 2017.