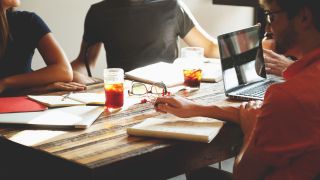 Since Jake Knapp popularised the design sprint, it's been used by design teams all over the world. Many write about their successes, some even shortening it from a week. I wanted to share how breaking a key convention led to a form of creative tension that can sometimes go missing in the sprints that I have been involved in.

Rather than co-locating the team in a war room, our design sprint ran across our London and New York studios, requiring us to work differently. We found this created an empowered team that collaborated and competed with one another. Also, the time difference meant that we could work around the clock (see our web design tools for more help on collaborating).

Digitise the war room – we worked in a collaborative online document to share and refine our research into insights, including photos from co-creation and whiteboard sessions and tagging each other when something needed to be clarified or assigned. We communicated on Slack with 15-minute daily scrums on Zoom. Rather than losing consensus with the lack of a physical location, the experience was liberating, giving the team visibility of each other's thinking and creating 'streams of consciousness', spawning new ideas.

Competition over collaboration – there were two teams, each with a strategist and designer. After day one, we split the opportunity areas across the different teams, creating some healthy competition. The result was more divergent concepts and less group-think. When we had similar ideas, we built on and stress-tested them to see which was better. The best ideas won out as everyone felt they had ownership of developing them.

24-hour shifts – rather than letting the fact we were across time zones constrict us, we turned it to our advantage. It gave us the added energy that comes with two competitive tribes versus the collaborative single-space environment. A 2pm scrum with an evening 'baton pass' between the design teams created a 24-hour work shift with a high cadence.

The anatomy of the 'remote sprint'

Start and end with the user – we augmented our marketplace review with research and co-creation sessions in our London and NY studios, each using slightly different approaches. The London team shadowed and interviewed one type of user while our NY team ran interviews and co-creation sessions with another. The different approaches allowed us to go deep on attitudinal insights and revisit users with our ideas once they had started to take shape.

The first 24 hours: define the problem – we brought together our marketplace review, trends and customer insights into a set of problem statements. London kicked things off by starting to define problem statements with NY coming online to build and pivot on what we were proposing.

The second 24 hours: ideate, sketch, and storyboard concepts – we were ready to hit the ground running with our scrum and were able to show where we had taken the opportunity spaces and begun turning them into storyboards and concepts.

The last morning: validate and refine – at the end of their day, NY referred back to the user research to rank the concepts based on which pain points they addressed. Doing the research up front meant we had a catalyst for ideas from the start and were able to validate ideas based on the contextual inquiry with users.

Nurturing a stream of consciousness

A multi-disciplinary team from both sides of the Atlantic allowed us to develop hypotheses, ideas and validate them quickly. It allowed the best ideas to thrive in a form of creative tension and explore a stream of consciousness together. Sometimes this is missing in sprints when the team is together.

A design sprint can provide a structured way to explore a business-critical issue or product but don't be afraid to tweak it for your organisation – it worked for us.

This article was originally published in issue 320 of net, the world's best-selling magazine for web designers and developers. Buy issue 320 here or subscribe here.