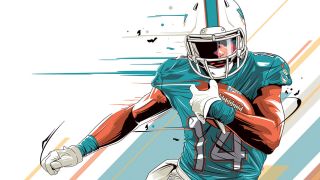 Before starting your drawing it's important to decide what type of movement you want to capture. Try to keep it simple and dynamic, rather than having a composition with lots of different angles and directions, which can be busy on the eye.

Once you've decided on the main movement for your composition you can then start figuring out how to draw this movement. You can then flesh out the illustration and add smaller, more local areas of movement if it adds to and supports the main movement. I prefer to keep the angles and direction of movement to a minimum, which means I can then exaggerate it to make the image as dynamic as possible.

It's also important to not only think about the movement of the character or object, but also how that movement might affect the surroundings. This will help your image to feel more 'real'.

Sketch out different ideas for angles and movements to see which one will give you the most exciting composition. You want to find a balance between a natural-looking pose, but also an exaggerated one to make it as dynamic as possible.

02. Flesh out the subject

Once you've got your pose and angle of movement, flesh out your character or object. Think about how the surroundings will be affected by the movement. Here, the character's clothing needs to reflect the chosen angle of movement.

To really exaggerate the movement, I like to extend some of the colours and details to create lines of movement. This gives a real sense of speed and direction of travel, which all adds to the movement that we're trying to capture.

This article was originally published in issue 155 of ImagineFX, the world's best-selling magazine for digital artists. Buy issue 155 or subscribe.