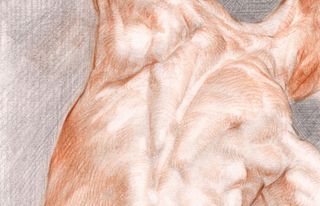 In this masterclass, I'll reveal the basic steps you need to follow to learn how to draw figures. I'll start with the first conception – or inkling of an idea – and take you through to the final presentation.

Each written step is also covered in the video below, and involves applying core visual tools to develop your concept. Drawing is the graphical interface to your imagination: these techniques enable you to relate your idea to yourself and the world.

The aim of this workshop is to bring a feeling of life to your figures, based upon movement. We'll focus upon action – otherwise known as gesture – and the primary rendering steps involved in drawing a figure from imagination.

When drawing from life and imagination, the key is to understand the action that you're trying to depict. This is an analytical process. In this example, the lines lead you through the figure – they're not copies of shapes, outlines or stick figures.

Each fragment leads you to the next, as if you were animating a journey through the figure, moving from one side to the other. It's not about creating dead drawings like CSI: it's all about transition. Make the viewer's eye move.

The next primary technique involves drawing lines that go across and around the form, similar to a basic wireframe. Notice how this provides a clear understanding of the form in space. Focus on 3D, not shape or tone.

Here we come to the workhorse for describing form in action: the basic sphere. Drawing a sphere is the first step in the development of a figure. When adding spheres, focus upon creating clear, simple volumes.

You can look at these as prototype anatomical structures, but don't become obsessed in making them perfect for now. These are general forms that will be adjusted as we go along. For now, pay particular attention to how they overlap.

Our goal as artists is to add a sense of life and movement to our drawings. So it's important that you use lines that communicate the gesture. Notice how the same simple spheres communicate very different actions. Every line has meaning. Your drawing needs to be purposeful in developing your first idea, which is your end goal.

The way in which your drawing communicates a sense of physical reality is key to your figure having a sense of life. The first exercise in studying animation is the bouncing ball, and the primary elements of how the ball changes shape on hitting the ground and regains its shape in rebounding.

Squash and stretch are fundamental drawing terms. I first heard these in discussions of the works of Michelangelo and Pontormo. Look at the Belvedere torso, copied by artists since Roman times. Note how I'm applying this basic concept to the simple forms of the figure.

When we drew the simple cross-contours back in step 02, each showed a section of a cylinder. Like the sphere, the cylinder becomes our next basic tool for figure drawing, and a building block for anatomical information.

Where you place the ends of the cylinders and how you draw the ellipse are the main considerations in showing direction and foreshortening. The cylinder becomes part of a visual structure that we build anatomical structure on.

Our next drawing tool is the box, which works to both clarify our understanding of the live model and our conceptual intent. This is because it introduces critical anatomical landmarks that show us symmetry – a key element in revealing action.

At this point in the figure drawing, we get a merging of fundamental construction and anatomy in action. All the muscles are connected at two points; some at more. How the basic underlying structure moves and interacts affects the surface anatomy.

So now is the perfect time to focus on not only the muscles, but the fabric of skin and fat on top of the muscles, and their interaction. Remember that everything goes over, around, compresses and stretches.

It's important to focus on how our original gesture sketch is applied in the development and rendering of the anatomy. We're drawing figures in action, not anatomy book illustrations. Each of the lines leading through the figure are transitions from one point to the next. Using these lines as guides, you can compose the anatomy to communicate the action.

Your first tonal rendering tool is the modelling tone. Push the sides back, and what faces you is in light. As the form turns away it goes into tone. The tones move the eye in the same way that lines do. They have to direct and describe the form. Don't copy tones, but use them to describe form.

A major element in figure drawing that's often overlooked is the subjective content of the subject. In this example, notice how the look of the eyes and expression change the feeling of the drawing. Make the action and body language obvious, or no one will understand your intentions for the piece.

When working from photographs, it's important to keep in mind that a copy of a figure in action doesn't mean the drawing will show action. You must create it. As I tell my students: we never copy; we analyse and construct. Compose the anatomy to show the action.

This article originally appeared in ImagineFX issue 144; buy it here!