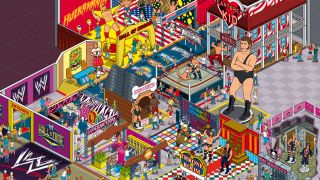 When WWE Magazine recently wanted an illustrator to imagine a Hall of Fame for its best-loved stars, London-based, award-winning artist Rod Hunt was its first point of call.

"WWE Magazine got in contact with me after discovering my work though Behance, liking the detail, characterisation and fun elements of my work," Hunt explains. "Specifically, they liked the feel of my project Five Ring Circus about the race for the 2020 Olympic games, as well as my theme park maps."

Well-known for his appealing isometric drawings and pixel art, Hunt had just seven days to illustrate some of the company's most famous wrestlers in his distinctive style.

The brief required Hunt to imagine what a real WWE Hall of Fame might look like and include a number of well-known wrestling stars. "Apart from the lose outline, all the detail was pretty much left for me to decide," Hunt says. "I researched all the wrestlers thoroughly so as to understand their characters, costumes and personas, as well as the culture and visual style of WWE."

On a tight deadline, Hunt got straight into production. "Working in Biro I started doodling ideas and quick throwaway compositions in my sketchbook," he says. "From this I created a full detailed pencil rough using a 2B pencil and heavyweight cartridge paper to show the client how the illustration could look and work within the layout in the magazine.

"At this point there were a few tweaks to the composition as they decided to remove most of the text blocks on the page to make more room for for the illustration to show it off to it's full extent. Once the rough was approved I proceeded to create the final artwork using Adobe Illustrator running on an iMac drawing the piece with a Wacom Cintiq screen tablet."