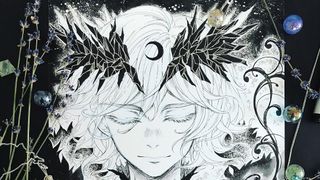 Another October has come and gone, and for plenty of artists that means another Inktober challenge is over. It also means that there are plenty of new ink illustrations to marvel at, thanks to the hard work and talent of online artists.

For the uninitiated, Inktober is a challenge created by illustrator Jake Parker way back in 2009, which calls on artists to create an illustration using ink every day throughout October. Over the years the challenge has really grown in popularity and attracted the likes of artists from Walt Disney Studios.

We've already seen some of the best artists from Inktober 2016, but that's so last year. To see what Inktober 2017 has produced, scroll through our roundup below of 10 of the most inspirational artists to take part in the challenge.

Seeing as Inktober happens in the same month as Halloween, a lot of artists create spooky sketches with their pens and brushes. Oslo-based artist Cathrine Sandmæl brought her drawing challenge to a close with these delightful skulls, which strike a nice balance between the supernatural and the illustrative.

Whipped up with with ink and watercolours from Windsor and Newton, the skulls and foliage work together nicely and are one of the prettiest reminders of our own mortality that we've seen recently.

Twitter user Kanzaki Yufei is a 2D artist and video game enthusiast who has fully embraced the Inktober challenge. Perhaps the challenges posed by video games have given Yufei a good work ethic, because the artist has managed to keep up with the pace of Inktober to deliver some truly original and eye-catching characters. Just take a look at this glum figure sheltering underneath a toadstool.

What's more, Yufei has posted work in progress images so we can see how the art came together.

American artist Becky Cloonan is something of a superstar in the comics industry, so it's been a real treat to see her Inktober illustrations emerging on Twitter.

Cloonan, who was the first woman to draw the main Batman title, has been posting haunting images that appear to gaze right into the core of your soul, such as the above image which she captioned "Awaiting the judgement of Osiris". Although if we were to judge Cloonan's Inktober art, we'd say it's outstanding.

Another Batman artist, Staz Johnson, has also been sharing Inktober illustrations on Twitter over the last month. Johnson has sketched out an array of characters, ranging from James Bond to zombie Nazis, but it's this image inspired by the 1991 film The Rocketeer that we like the best.

It could be because we think The Rocketeer is an underrated film (although nostalgia is probably playing a key factor - I'm youngish, bite me) which is why the illustration caught our eye. However that's not to downplay the expert inking on display which captures the personality of the character perfectly.

Just like Cathrine Sandmæl, Laura Heikkala blends watercolours and inks to achieve stunning results. The Finland-based artist also has a real eye for creating surreal images that draw the viewer in, especially with the above image entitled Grandma's Cloak.

With a short title and a striking character, Heikkala instantly creates a world that we want to know more about. We're also blown away by the invisible effect, which looks so smooth and effortless.

Hungary-based artist Lüleiya describes her work as dreamy illustrations that are brought to life with both digital and traditional tools. You can see all of this in action in the Wizard of Celes (above) which is packed with enchanted imagery and fantastical textures. (Is the wizard some sort of master of the night sky? We like to think he is.)

As well as being a formidably talented illustrator, Lüleiya is also a dab hand at decorating her images with flowers and crystals to add to their overall effect. What's more, if you like what you see, you can buy Lüleiya's Inktober art from her online store.

A handy tip for artists struggling with Inktober is to pick a theme you can hang your illustrations around. That's just what illustrator Marc Pattenden AKA Marc Doodles did for Inktober 2017 with his series of bird images.

Pattenden's full list of Inktober illustrations can be found by visiting his Twitter profile, where's handily collected them into one picture pinned to the top of his timeline. If we had to pick a favourite though it would have to be this quizzical eagle owl.

Polish illustrator Daria Golab describes herself in her Twitter bio as a "creative soul, coffee drinker, failure". We're sure the first two points are true, but we can't agree about the last one when we see the stunning work she's created for Inktober 2017.

Just look at the flowing detail in Golab's illustrations, such as the one above from day five of the challenge. Golab's not just a master of linework either. She also has an eye for vibrant colours, which she uses to give her art an added boost. Be sure to head over to her Twitter profile to see this skill in action.

London Ontario-based artist Derek Laufman sure likes to keep busy. As well creating RuinWorld comic and working as a freelancer for the likes of Marvel, Warner Bros, Hasbro and Mattel, he also found time to squeeze in daily Inktober illustrations.

This picture, titled Metal Slug, takes its inspiration from the run-and-gun video game series of the same name and gives the characters that distinctive Laufman twist. It's also the last picture from Laufman's Inktober challenge, but if you like the look of his work you're in luck as his ink art is up for sale in his store.

Another big name to take part in Inktober 2017 is Brian Stelfreeze. Comic fans are probably already aware of the American artist who illustrates for both DC and Marvel among other publishers, but for those that haven't seen his work just check out the sample of his brilliant work above.

We're in awe at how Stelfreeze can blend his inks so smoothly to create a sense of depth and texture, but when he needs to he can also lay down solid shades to really make his art pop. This image brings his Inktober art to a close, but we recommend heading over to his Twitter page and checking out his other ink illustrations. They're so good they look effortless, and are sure to inspire you to pick up a pen and a brush and create your own masterpieces.