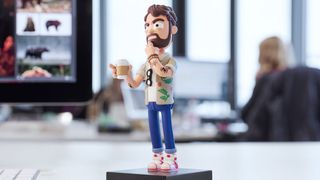 Back in March, Adobe launched a series of hilarious video spots as part of its Hovering Art Director campaign. Poking fun at the flaws of micro-managing and self-aggrandising art directors, this relatable campaign was an instant hit with designers.

And just like its real life inspiration, the Hovering Art Director couldn't be kept away for long before it reared its bearded head once again to ask: "Can we make it pop?"

If the art director you deal with in real life isn't annoying enough, and you'd like a miniature version to torment you on-demand like a reverse voodoo doll, there are two ways you can get your hands on this fiendish figure.

First up, you can submit your best one-liner in the style of the Hovering Art Director on the Adobe Stock competition website. For this contest, you'll need to think more along the lines of, "I like where this is going, but let's start over", rather than any sort of constructive feedback designers could actually put into action.

Alternatively, you can sign up to the live stream sessions Adobe Stock is hosting on YouTube. Led by senior Creative Cloud evangelist Paul Trani, and designers Chuck Anderson, Colin Smith and Lisa Carney, these interactive sessions will show you how to create an ad and give you the chance to win one of the hallowed Hovering Art Director action figures. For full details, check out the Hovering Art Director's very own webpage.