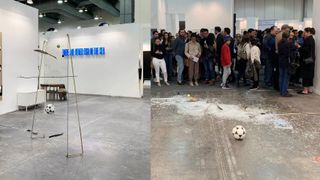 An art critic has broken a sculpture valued at $20,000, by either standing too close to it with a Coke can, or trying to rest her can on the piece: the details are disputed. The piece by Mexican artist Gabriel Rico was entitled Nimble and sinister tricks (To be preserved without scandal and corruption) I (2018) and consisted of a sheet of glass with objects suspended through it, including two balls, a stick, a feather and a stone. It was on display at Mexican gallery Galeria OMR.

The art critic, Avelina Lésper was less than impressed with the piece, and as a critical comment, she set her empty drinks can on the floor next to it, in order to show that the artwork would remain unchanged: "it could be two balls as it could be two cans", she told Milenio.

Lésper said that as she moved the can towards the stone, it was "as if the piece had heard my comment, as if it had felt what I thought of it," and it shattered and fell on the floor. Some reports have said that Lésper placed the can on one of the stones, and that's when the piece shattered.

The gallery said on Instagram that it is "irrelevant how it happened," and that Lésper getting too close to the artwork is what destroyed it. It added that the incident suggests a "huge lack of professionalism and respect".

In her statement, Lésper talked about how art can be improved by its destruction, suggesting that the piece should be exhibited as it is. She said she was sorry for what had happened, and added: "I didn't do it on purpose, I didn't break it, I didn't hit it, I didn't touch it." Spanish speakers can listen to her whole statement, below.

Whether or not Lésper touched the artwork seems to be the sticking point here, although perhaps the details of the incident don't really matter. The breakage brings up the question of whether fragile objects should be on display where people can get so close to them. Or maybe whether drinks cans should be allowed in galleries. Either way, we hope the artist's dreams haven't been completely shattered.