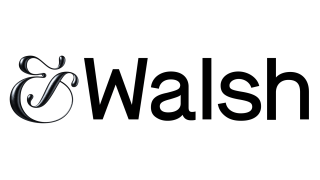 The new firm's logo (above), features a fluid, curvy ampersand shape that stands in contrast to 'Walsh', which is displayed in Milieu Grotesque’s Maison. Pushing the art of typography to new limits, the design is supported by 50 secondary ampersands, all of which will appear as bizarre, distorted versions of the logogram. The idea being to clearly and effectively communicate Walsh's goal to help brands "find their weird".

Her previous agency's logo (below) was a clever way to communicate the partnership between Sagmeister and Walsh. Foregrounding the ampersand addressed Sagmeister's head-turning decision to offer Walsh a partnership position in 2012 when she was 25. It's a powerful example of a typography-based identity, see more examples of this in our guide to logo design.

On the &Walsh branding page, the studio adds: "Our branding uses an ampersand for both the visual identity and tonal expression. This typographic system includes our clients, projects, collaborators, experiments & endeavors: hence the (Blank) & Walsh."

"We’ve drawn 50 final ampersands in our style and will draw a custom ampersand for every new project or team member. The ampersand is one of the most beautiful typographic characters and will challenge ourselves to continuously reinvent its form."

Check out how these iterations appear in the gallery below.

There's been some confusion as to how the new studio will work, given that Walsh wrote in a blog post that "this isn't the end of Sagmeister & Walsh". It looks like Sagmeister has done a bit of a Jony Ive, in that he's left, but will still collaborate on art projects, just not commercial ones.

In terms of operations, &Walsh will still maintain the 25 people who already work for the firm. It's an exciting development for Walsh, who points out that: "Only 0.1% of creative agencies are women-owned. POINT. ONE. PERCENT. How does this make any sense when women drive about 80% of consumer purchasing?"