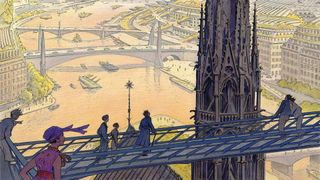 Two weeks after the devastating fire at Notre-Dame Cathedral, which destroyed the building's spire and most of its roof, Paris is coming to terms with its loss. Over €1 billion has already been pledged for reconstructing one of the world's most famous buildings; the question now is how Paris should approach rebuilding the iconic cathedral.

A straight rebuild isn't really Paris' style; while it's a city with a proud historical heritage, it's also one with an eye on the future. It's always been ready to modernise where appropriate, whether it's Haussmann's renovation of the city, which demolished medieval neighbourhoods in favour of wide avenues, parks and squares, or the Louvre Pyramid, which was hated by many when built but is now a much-loved Paris landmark.

France has already launched an architectural competition to design a new spire and address the question of whether to replicate the old one or create a new one informed by modern techniques. And taking things one step further, the French newspaper Libération has commissioned seven cartoonists and illustrators to come up with their own visions for the future of Notre-Dame.

The results are undeniably Gallic and particularly notable for a shortage of sentimentality, which is bit of a relief after all the mawkish drawings of crying Quasimodos that were doing the rounds on social media after the fire. Instead we get a refreshing mix of serious suggestions, flights of fancy and some good old-fashioned cynicism.

Should Notre-Dame's spire be rebuilt? François Schuiten thinks so, but he takes things further by suggesting a series of bridges and walkways that would enable the public to see the work up close and appreciate the link between the cathedral and its city.

Brecht Evans takes a more light-hearted approach with his bathedral, inspired by Paris' motto: "Fluctuat nec mergitur", or "He who rises with the wave is not swallowed by it". He suggests an eclectic and colourful rebuild in the style of Friedensreich Hundertwasser or Gaudi's Sagrada Familia, complete with gardens and sprinklers.

Sparked by Disney's donation of $5 million the Notre-Dame fund, Emilie Gleason's design is an abrupt cry of, sod it, let's turn it into a theme park, then.

A more sombre take from Zeina Abirached, who notes Notre-Dame's new silhouette and how the shape of the sky around the cathedral will never be the same. "From now on this absence is part of our story," she concludes.

For Lorenzo Mattotti, the solution is clear: leave Notre-Dame without a roof and instead give it over to greenery, and cultivate herbs and medicinal plants. "And in this greenery raise the angels, who would roam the city with their rustling wings and their murmurs, in the angelic language of which we humans only perceive silence. For 1,200 years." Okay.

While it's heartening to see all the donations that have flooded in for Notre-Dame, many have asked why a building gets all the money while more deserving and urgent causes are left without, and that's where Sophue Guerrive is coming from with her design; she's all for a cathedral without a roof as a symbol of welcome and sharing.

Finally, from Philippe Druillet, this radical design that reimagines Notre-Dame as a glass skyscraper, all angles and cutting-edge materials. Again inspired by Gaudi, Druillet aims to combine modernity and tradition to create something for the ages.

If you have a smattering of French or don't mind hitting the translate button, you can learn more about the thinking behind these designs over at Libération.