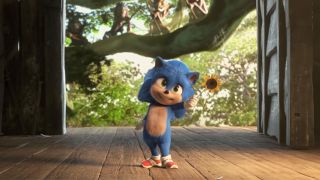 Could Baby Sonic be the curve ball that saves the whole Sonic movie debacle? A new trailer and poster from Paramount Pictures Japan reveals that the upcoming movie will include Sonic's origin story... which of course means we get to see our hero when he was just a hoglet.

The news follows a trend for young versions of iconic characters. At the end of last year, Baby Yoda became the nipper that spawned a thousand memes. There was also Baby Thanos, but the less said about him the better. Revealing your hero as a child seems to be an easy way to win over your audience with an instant shot of cuteness (you can also explore our character design tips).

Check out the trailer above – the first glimpse of Baby Sonic appears around the 20s mark. In it, we see a young Sonic speeding happily through the hills, and in another scene, offering up a flower. The ridiculously cute critter also appears on a poster for the movie – although some of his adorableness is probably due to those anime eyes.

The story of the Sonic movie has been one wild ride. When a branding deck was first leaked to the public, the design of Sonic sparked such a strong backlash that Paramount went back to the drawing board and redesigned the character completely. MPC Vancouver, the 3D studio that worked on the movie, later shut down.

Although Baby Sonic's look is in line with the reimagined character design, we'd have been very intrigued to have seen the original version, if such a thing existed. So far, the public is very much on board with the design of Baby Sonic (phew), but we'll leave you with a couple of ideas of what he could have looked like.

Here's what I'd imagine the original Baby Sonic design looked like pic.twitter.com/947CPaH53CDecember 26, 2019

since we're talking about baby sonic, remember this monstrosity from sonic underground? pic.twitter.com/RIKQKPFyyEDecember 26, 2019