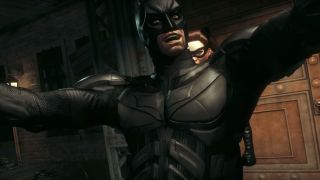 There have been lots of different interpretations of Batman over the years. Perhaps you grew up watching the campy Adam West series, or maybe you're a fan of the gruff and gritty Christian Bale films. Thanks to his iconic appearance, which suggests his creator followed our character design tips, the Caped Crusader easily lends himself to variation without being lost. However we doubt you've even seen him as he appears in a hilarious model swap video that's been doing the rounds recently on social media.

In the viral clip, the character models of Batman and Catwoman from the game Batman: Arkham Knight are swapped, revealing their underlying gender stereotypes.

Or, to put it in layman's terms, Batman transforms from a stoic and moody hero into a flirtatious femme fatale. This is communicated through his new body language, which is complete with a slinky walk, thrust-out chest, and manic smile. Meanwhile Catwoman strides about with a back as straight as an arrow and barely shows any emotion at all.

The icing on the cake is the fact that the voices aren't swapped in the same way as the character models. So while Batman parades around with his new-found mannerisms, his voice is still that of Catwoman's. It's a bizarre juxtaposition that makes for compelling viewing, especially with the stoney-faced Catwoman talking in a baritone.

Check out the clip above from YouTube user sn0sh00 to see the side-splitting role reversal of the two characters in action.

But as well as being entertaining, the clip is a lesson in how game designers use movement to communicate character. By seeing familiar actions in a new context, we get a greater appreciation of how information is relaid to us via gestures.

Despite being a couple of months old, this video found a new lease of life earlier in the week as a cut scene from it was tweeted by content strategist Juan Buis. At the time of writing the clip has racked up hundreds of thousands of likes and over eighty thousand retweets.

In the replies to the tweet, users praised the clip with @OrionKidder simply calling it "Art" and @BondageLand saying "This is my new favourite version of Batman."

However the video also sparked a debate about the problematic gender stereotypes in video games and comics.

the animations they created for catwoman are honestly ridiculous and way over the topNovember 27, 2019

there are a lot of people in the comments excusing sexism as part of Catwomans “character” and honestly... y’all stink. pic.twitter.com/QE4v1s30oDNovember 27, 2019

If you ever needed to explain why giant muscles on superheros isn't the same thing as sexualizing women superheros, here's your opening arguments right here.November 27, 2019

Whether or not you agree with these points, the video is still a fun way to examine character design and learn the subtle ways in which personalities can be communicated.