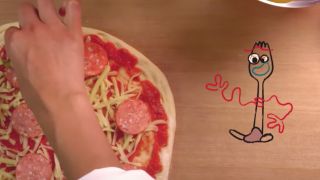 You can now learn to make Pizzas with Forky (Image credit: Pixar)

With restaurants closed, many of us will have found ourselves spending much more time in the kitchen over the last few weeks. Whether that's a good or bad thing is up to you (we're not here to judge your cooking), but if you've long since burned through your list of specialities, you might be in need of a little inspiration. Luckily, Pixar has served up some fun recipe videos – and they may even inspire little ones to help in the kitchen.

There are three Cooking with Pixar videos available so far, featuring dishes from Toy Story, Onward and Bao (the short film attached to Incredibles 2). Not only do the videos feature simple, fun instructions, but they're also filled with the kind of delightful animations you'd expect from Pixar (check out our best css animation examples if you feel like making your own). And don't forget – every Pixar movie is currently available on Disney Plus, and you can bag a seven-day free trial right now.

The first video (above) teaches the viewer to make the titular Bao (who, by the way, you might have to explain isn't real when it comes to eating time). The second video, meanwhile, involves cooking a Pizza Planet pizza, helped by none other than Forky from Toy Story 4:

The third recipe (below) teaches you to make a birthday cake with Onward's Ian and Barley Lightfoot. Cooking With Pixar videos are being rolled out monthly, so we hope to see a few more over the coming weeks. It would seem almost criminal not to include a dish from Ratatouille.

Speaking of Pixar, we recently learned some mind-boggling behind the scenes facts about the making of Toy Story 4. If you think these cooking videos are impressive, just wait until you see how much incredible detail goes into animating a feature-length film. Did we mention that they're all on Disney Plus right now?

News
Video
how to
Animation