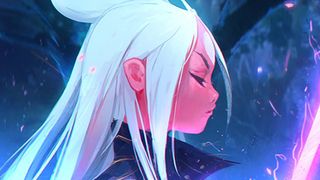 For the last four years he’s been developing an original character, Nima, and her story. Alongside his energetic brand of video art tutorials, Ross Draws fans will have noticed Nima regularly popping up as the subject of his walkthroughs.

Now Tran has launched a Kickstart to bring Nima and her unique world to life in a slick art book, packed with sketches, key scenes and stunning cinematic paintings. “I want Nima’s world to excite people the way I was drawn into the world of Avatar the Last Airbender,” he explains.

He’s offering a range of tiered rewards to people who pledge, from high-definition wallpapers and a PDF book of sketches through to signed posters, character postcards, a Skype session with the in-demand artist and more.

Head over to his Kickstarter to find out more.