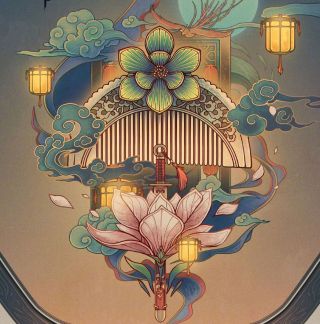 The central panel from the Mulan poster (Image credit: Disney)

There's a diverse portfolio of films on show here (see here for more inspirational poster design). And while it's not exactly hard to imagine the live-action remake of Mulan in a Chinese setting, it's more of a leap to picture a Chinese take on Marvel's Black Widow, or the superhero-horror flick, New Mutants (remind yourself of your favourite Disney characters by signing up to Disney Plus).

The posters include elements of traditional Chinese culture like calligraphy, lanterns and flowers, as well as fireworks and the moon, which work together with the themes of the films to create a dream-like aesthetic.

Much of the artwork feels like a fusion of styles. Free Guy has a science-fiction edge while the Death of the Nile visual is distinctly Egyptian but bound up in a swirl of Chinese-inspired smoke.

The West Side Story characters have been clad in traditional Chinese dress and transported from the streets of 1950's New York City – though their signature dancing style is super-recognisable. We also had to include this Toy Story 4 design from 2019. This one was probably the hardest to imagine, but seeing Woody, Jessie and Hamm all dressed up to celebrate is a real treat. And given the pig represents luck in China, it's no wonder he is centre-stage.

All this has got us excited about this year's films. Movie-fans should also check out these alternative Oscars statues, as well as this incredible live-action remake of Toy Story 3, made by two teenagers over eight years.