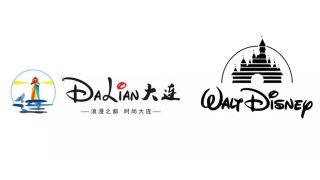 This might be the most blatant copy of one of the most famous fonts on the planet. Unveiled last week as the new logo for the Chinese city of Dalian, the design won a competition named 'Dalian has a good gift', run by the Dalian Culture and Tourism Bureau. The competition received nearly a thousand entries in less than three months – but the winning choice has prompted an investigation into plagiarism following a complaint.

The logo design (see our best logos post for a bunch of designs that are more successful) managed to get through the selection process without anyone noticing, something we find kind of hard to believe given the 'D' looks as if it's been lifted directly from the trademarked Disney logo.

The design, named the City logo of Dalian features a lighthouse standing above stylised blue water, and the word 'Dalian' sits underneath the image, in Pinyan and Chinese characters that include 'Iron Mountain Lighthouse', 'Moonlight Sea', 'Playful Dolphin' and 'Dalian'.

"At first glance I felt the logo was all right, except the image was too complicated with too many colours," says the blog, "but then I found something very similar when I checked the font… Isn’t it the same font of the Disney logo?"

Frankly, we think that's being pretty kind. The 'D' jumps off the page immediately, as does the loopy dot on the 'i'. So much so that you'd be forgiven for thinking the logo has a direct connection to Disney.

The logonews blog created these GIFs to highlight the font issues. The first shows the exact letters that are problematic:

And the second imposes the Disney font on top of the Dalian City logo lettering, to cement the point even further.

And the controversy doesn't stop there. Plenty of internet users have taken issue with other parts of the design too, as the tweet below details. The graphic itself has similarities with this Brisbane Pathway logo, created by an online artist known as blueii. The water graphic is super-similar to the water found in the Lianshui city logo (another Chinese city). To top it all off, the circle that loops around the lighthouse is reminiscent of the animated Disney star.

The winning design of Dalian’s city logo is accused of plagiarism. As netizens note, almost none of the design is original and it’s basically a mash-up of different images and existing logos. Photo from Toby Yeung. pic.twitter.com/AUwbtTn8s0December 19, 2019

Competition entrants were required to guarantee the intellectual property rights of their work, but it's as if the artist has magpied bits of other logos he's found and smushed them all together to create his entry. We wonder if Disney's lawyers will see fit to get involved.

The designer may have to give up his 30,000 yuan (US$4,300) prize money and faces disqualification. "The investigation is currently under way," says the statement from the Dalian City government, "and the results will be announced as soon as possible".

It certainly says something about the selection process that this wasn't picked up on before the design actually won the competition. Has the Dalian city government never seen a Disney film? Given that Disney recently opened a $5.5 billion theme park in Shanghai, we find it hard to believe.

This saga deserves to be ranked up there with the most blatant attempts of plagiarism ever. We can only assume the designer was particularly naive to copyright law, otherwise how on earth did he think he'd get away with it?