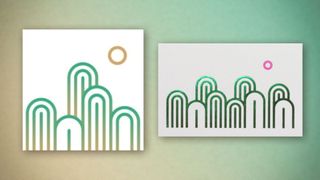 Chinese microblogging giant Weibu has withdrawn its new Instagram-style app after it became apparent that its logo plagiarised a 2015 design by a Korean design studio.

The new app, called Oasis – or Lüzhou in Chinese – launched on 3 September and quickly became the most popular app on Apple's Chinese app store, but was swiftly withdrawn a few hours later after a user pointed out on Weibo's online forums that the logo design had been lifted wholesale from Studio fnt's designs for the 2015 Ulju Mountain Film Festival.

Anyone who's been around the design world for any length of time knows that you can't go too long without someone claiming that a brand new logo design is a rip-off of another one. It's one of those occupational hazards of design life; after all, on the whole, nobody sets out to copy another piece of work for their new branding project.

But in logo design, where you're often working with simple and minimal shapes, it's inevitable that occasionally you'll create something that looks a little – or even a lot – like an existing design.

Unfortunately for Weibo, that argument doesn't hold any water in this case. The logo, depicting stylised mountains and a sun drawn in a distinctive line art style is a straight copy of a business card design created as part of fnt's UMFF project. It even steals the visual effect of the foil printing used on fnt's business cards, but in this case achieves a near-identical look with a colour gradient.

In fairness to Weibo, it took the app down as soon as it became aware of the blatant plagiarism, and posted an apology soon after in which it admitted that in the past its designers had borrowed elements from online materials.

Oasis further states that it has initiated an internal review of its design process and has been contacting relevant design parties to resolve any copyright issues.