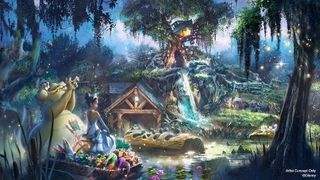 Disney has confirmed that Splash Mountain is to be replaced by The Princess and The Frog, releasing concept art and details of the ride's premise. Song of the South has been in residence on the mountain since the ride was first imagined in 1987 but due to outdated cultural depictions and problematic themes, it's finally being ditched – an unsurprising move given the film is firmly locked in the Disney vault, unavailable for streaming on Disney Plus or purchase on DVD.

According to Disney, the reimagineering (a word we're pretty sure Disney made up) of the ride has been in the works since last year, predating much of the recent pressure to rebrand Splash Mountain, which included a petition supporting The Princess and the Frog as an alternate theme, signed by 22,000 people. Some fans were so inspired by the idea they created their own concept art for the ride (create your own with these Cinema 4D tutorials).

Good morning, and some good, fun news! Lead by Imagineer, Charita Carter, Splash Mountain is going to be reimagined as a Princess and the Frog ride!! •👑• "It is really exciting to know that Princess Tiana's presence in both Disneyland and Magic Kingdom will finally be fully realized! As passionate as I am about what we created, I know the fans are going to be over the moon. The Imagineers are giving us the Princess & The Frog Mardi Gras celebration we've been waiting for, and I'm here for it!" ~Anika Noni Rose/ Princess Tiana👸🏽💚 •👑• 👸🏽💚🎢👸🏽💚🎢👸🏽💚🎢👸🏽💚🎢👸🏽💚 #PrincessTiana #DisneyPrincess #SplashMountain #DisneyParks #DisneyAnimation #WaltDisney #DisneyWorld #DisneyLand Anika Noni Rose

Anika Noni Rose, who voiced Princess Tiana – Disney's first-ever black princess – posted the news on Instagram. The news also came via a blog post from Disney, which outlines the plans. Both sources give a glimpse into the project led by Imagineer Charita Carter with the release of official concept art.

According to the blog, the ride is to be a "musical adventure" following Princess Tiana and Louis after their final kiss, and "as they prepare for their first mardi gras performance". The Imagineers were passionate about creating an "inclusive concept" that "speaks to the diversity of the millions of people who visit [their] parks each year." It went on to say that the "re-theming of Splash Mountain is of particular importance today".

It is unclear when the new Splash Mountain will be unveiled to the public at Disneyland and Walt Disney World, but a timeline will be released soon. For now, you can explore our informative post on theme park design, which includes some more brilliant concept art.