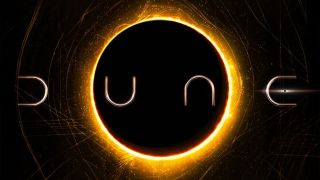 The brand new logo for Warner Bros.' new reboot of Frank Herbert's Dune has been released, and it closely matches the controversial title treatment that leaked back in January – with one key difference. Along with the first image from the movie (featuring Timothée Chalamet as Paul Atreides), the new logo first appeared on the film's official Twitter page last night.

The logo uses the four U-shapes in different orientations that we first saw in photographs from a French convention at the start of the year. Back then, the design proved contentious, with many concerned that the leaked logo appeared to read 'DUNC' rather than 'DUNE'. However, that widely-shared concept (below) was in fact a fan rendering based on photographs from the convention, and was missing an all-important lens flare inside the 'E'. Thankfully, said lens flare is present and correct in the new, official logo. Phew.

Looking for ideas? Check out our guide to finding logo design inspiration.

Directed by Denis Villeneuve, Dune is slated for release on 18 December this year. According to its official synopsis, film "tells the story of Paul Atreides, a brilliant and gifted young man born into a great destiny beyond his understanding, who must travel to the most dangerous planet in the universe to ensure the future of his family and his people." An all-star cast features, alongside Chalamet, Zendaya, Oscar Isaac and more.

You can read all about the original leaked logo drama (and enjoy a brilliant pasta-based take on it) here. We're excited to see how Villeneuve makes his stamp on the sci-fi franchise, and, most of all, we're relieved to know that this December, we won't be queueing up to watch 'Dunc'.