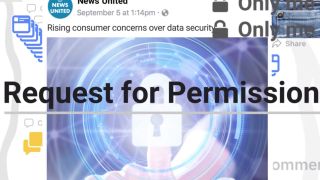 It's been a busy few weeks for Facebook CEO Mark Zuckerberg. Fresh from his grilling in front of congress, the Facebook leader has also been issuing print apologies in the wake of the social media site's massive data leaks. Now Facebook is taking the apologies up a gear with its largest brand marketing campaign ever.

First aired during the NBA Playoffs, the TV spot hopes to go some way to restoring the world's confidence after the data of 50 million Facebook users was snatched by Cambridge Analytica.

It's very much Facebook pulling out the big guns. With hashtags swirling around on other platforms encouraging users to leave the site, it's no wonder that Zuckerberg and co have gone nuclear with the biggest campaign in Facebook's history.

In the advert, titled Here Together, Facebook wants to remind people why they signed up to the site in the first place. There's even a cautious dash of humour as it alludes to befriending bosses and complicated relationship statuses. However the main thrust of the video is that Facebook wants to go back to basics and help people connect with one another.

The video, created by Facebook's in-house marketing team, The Factory, does a stylish job of addressing the situation, although it's also drawn fire for perhaps being a tad economical with the truth.

Referring to a massive data breach as "something happened" is very much the damage-controlling language of someone who's been caught with their trousers down. On top of that, pointing out that algorithms and ads on Facebook can be annoying is pretty rich, given that Facebook itself is in the best position to change that.

So is this a sincere apology, or more of a "I'm sorry I got caught" situation?

The six rules of saying sorry

Either way, Facebook has nailed its apology – according to Big Fish copywriter Will Awdry. Fresh from delivering a talk at D&AD Festival 2018 entitled Sorry Seems to be the Hardest Word, Awdry knows a good sorry when he sees one.

"I think Facebook has actually done very well," he explains. "They've followed the six, immutable rules to the letter."

"The principle quality to admire is that Facebook has accepted full culpability," continues Awdry. "There's no attempt to buck-pass. Perhaps the only concern is how long it took for Zuckerberg to step up to the plate, but that's about timing and not language, so outside my remit."

"There has been press commentary that discussed Zuckerberg's desire to combine the utopian, sharing, community-based values of Facebook with a highly aggressive, financial model and ethos. That has actually overshadowed the apology, in my humble opinion)."

"The team, the writers and the advisors around Mark Zuckerberg have done a really good job. I suspect there are very few of them. And while the value, standing and general approval of Facebook may have taken a sizeable knock, I believe the steps taken point to a happy recovery provided proof of emends is forthcoming in the very near future."

So does Facebook mean it? It depends on how you look at Facebook. If you see the site as a harmless way to connect with your nearest and dearest, the ad's melancholic music and sincere intent might win you over.

But if you're the sort of person who doesn't even like sharing personal details with your doctor, this probably isn't going to convince you to log in. (Although you do get to indulge in some Silicone Valley schadenfreude.)