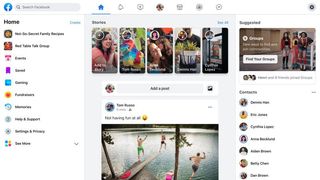 Facebook's F8 conference was in full swing last night, and the big news is that the platform has had a major redesign. After what one might call a turbulent 2018 for the social media platform, it's clear the company is on a mission to turn things around. Or, in this case, turn things white.

Chief executive Mark Zuckerberg took to the stage to reveal, among other things, that Facebook will be losing its iconic blue bar in favour of a sleek new white face (see above). Perhaps taking its cues from Twitter, users will also be able to take advantage of a new Dark Mode for web.

Other notable additions include a new tab with location-specific information for events, businesses, and other recommendations. The new-look Facebook has launched already and is set to be rolled out across the world over the next few weeks.

It's no surprise, as the rest of the world wakes up to the news, there's already a lot of talk. Many agree a redesign is well overdue, and the addition of Dark Mode has gone down particularly well. However, similarities with Twitter have not gone unnoticed.

I personally really like the redesign they previewed at #FacebookF8. I think they are almost completely right about the way social is going to go, I just don't think we can trust Facebook to take us there. pic.twitter.com/XS180flDOd1 May 2019

You can find more out about the changes coming your way via the Facebook blog. And it's not the only big news of the night – Instagram is also rolling out some interesting updates.