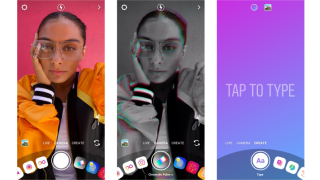 There were plenty of exciting announcements at Facebook's F8 conference last night. Everyone's talking about Facebook getting a major redesign, but it wasn't the only social media platform to be ringing the changes. Photo-sharing app Instagram also unveiled some exciting new features, including a redesigned camera and dedicated shopping tags. All of which it claims will help artists and creators to connect with their audiences more easily.

Interestingly, it will also be making follower counts much less prominent, and hiding like counts on posts. The idea presumably is to make Instagram feel like a friendlier, less competitive place.

Arguably the biggest update announced at the conference is a modernised camera for Instagram Stories. The horizontal selection bar for effects and filters has been replaced by a striking wheel, to help users customise their snaps. We've already seen how users like to know how to change the font in their Instagram bio, so this personalisation update is sure to go down a treat.

With this new camera tool, users can choose different modes and effects. And thanks to the new Create Mode, Instagrammers don't even need to take a photo or record a video to share content like stickers, quizzes and countdowns with their followers. This is where you'll also find the option to record live broadcasts.

A new shopping feature is in the works as well, one which will make it easier for artists to sell their creations to their followers. While users currently have to exit the app to purchase products that have caught their eye, soon they will be able to simply tap an image to purchase. Good news for designer-makers.

Other features announced at the conference include the ability to take a break from Instagram, a filter for abusive interactions, and the launch of a hidden like counter. You'll still be able to see who liked your post, but if you want to get the exact stats you'll have to count them all up individually or request the information.

Another welcome upgrade lets users show their support for a nonprofit by placing a 'Donation' sticker onto an image. This feature is live now, with Instagram promising that 100 per cent of the money raised will go towards the nonprofit of your choice.

Given that Facebook was recently dragged through the mud over its data breaches, it remains to be seen if these announcements will be enough to save its image. However the social media giant has already apologised with the biggest print campaign ever, and it seems to be actively listening to users with what we've seen from the F8 2019 conference.