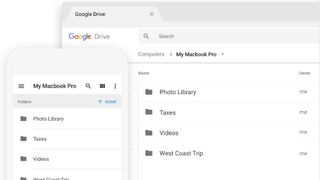 Earlier this week, Google unveiled the launch of its long-teased Backup and Sync feature. The tool gives everyone the opportunity to protect a whole computer's worth of system files via its cloud storage, and all for the princely sum of absolutely nothing.

Promising to be a 'simpler, speedier and more reliable way to protect the files and photos that mean the most to you,' the Backup and Sync app is sure to be a godsend for creatives with images and assets spread over a multitude of devices.

The tool works like a turbo-charged Google Drive in that it automatically stores files that are saved onto a computer's internal hard drive or other devices such as memory cards. If you've ever been thankful to Google Drive for saving a document all by itself, imagine that joy and relief but for your images.

Backup and Sync replaces the Google Photos desktop uploader and Drive for both Windows and Mac computers, and if it delivers on its promised ease of functionality, we could see the app rivalling the likes of Dropbox.

If there's one catch, it's that Backup and Sync has a 15GB cap due to the ceiling imposed by free Drive accounts. This leaves users with two options: pay for some more storage or be selective with what you backup to Drive.