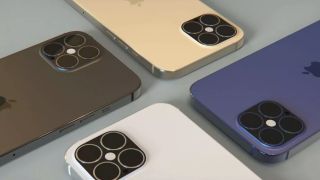 A recent render of the iPhone 12 lineup (Image credit: EverythingApplePro)

As is always the case in the build up to Apple's latest iPhone reveal, rumours about the design are coming from all angles. But thanks to recent supply chain leaks, we've just been given our clearest glimpse yet of the iPhone 12 – all four versions of it.

Japanese blog Macotakara has got hold of some plastic dummy units, which both confirm and dispute several of the rumours we've heard in the past few weeks. While we've no doubt the iPhone 12 will knock the iPhone 11 off the top spot of our best camera phones roundup, it might not do so in quite the spectacular fashion we'd hoped.

Recent rumours had suggested that the higher-end iPhone 12 Pro would include a LiDAR depth sensor for improved AR experiences, but Macotakara's dummy models suggest the Pro will maintain a similar three-lens setup to the current iPhone 11 Pro, with the extra LiDAR sensor nowhere to be seen. Still, we're expecting those three lenses to feature significantly improved autofocus and optical zoom.

Another disappointment is that the infamous notch might not be seeing the significant size reduction we had expected – or any reduction, for that matter. Indeed, the front of the device looks pretty much identical to that of the iPhone 11.

It's not all bad news, though. Fans of smaller phones might finally have reason to rejoice (especially after the disappointingly bulky new iPhone SE). These dummy models appear to confirm the introduction of a tiny, 5.4-inch base model. For creatives on the go, a truly pocketable yet powerful device could be a dream come true.

These leaks also support recent rumours that we'll be getting four devices: iPhone 12 (5.4-inch), iPhone 12 Max (6.1-inch), iPhone 12 Pro (6.1-inch) and iPhone 12 Pro Max (6.7-inch). As for the release date of the iPhone 12, according to Bloomberg, supply chain delays could push it back from its traditional September launch, although it's still expected to arrive this year. You don't have to wait to get your hands on an incredible iPhone though – check out today's best deals for the iPhone 11 below.