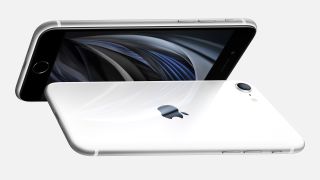 After months of will-they-won't-they speculation, Apple has finally revealed its budget iPhone for 2020 – and instead of being named the iPhone 9 as rumoured, the new device is called the iPhone SE. It's the second iPhone to take the SE name – the original, released in 2016, was an affordable iPhone for those who preferred a smaller form factor. This new SE is certainly affordable at just $399, but if it's a small phone you want, you might be out of luck.

Instead of the pleasingly pocketable 4-inch form factor of the original, the 2020 iPhone SE borrows the exact same 4.7-inch design of the iPhone 8, dashing the hopes of anyone who prefers small phones that are actually, you know, small.

We loved the size of the original SE and found it perfect for one-handed use. Still, there's a lot more tech to pack into the device these days, so perhaps we need to suck it up and accept that small phones are now a thing of the past. Still, we can't help but feel the same as the Twitter user below.
The iPhone is a great device for creatives – check out the best iPhone apps for designers.

Ugh, no one makes small powerful phones anymore, the ones that you can use with one hand. My iPhone SE is irreplaceable and after 4 years it’s still blazing fast, but the battery is dying, and now its successor is bigger and with the same name but without the same charm.April 15, 2020

Speaking of tech, however, that's one area where the new iPhone SE doesn't disappoint. According to the Apple newsroom, It packs the same A13 Bionic chip as the much more expensive (and yes, bigger) iPhone 11, which should future-proof it for a good few years. Apple also claims that the SE features the “best-ever single-camera system for great photos and videos" – indeed, it's the first 4.7-inch iPhone to feature Apple's popular Portrait Mode.

While a fast processor and great camera might not make this a bells-and-whistles iPhone release, that's the point of the SE. Not everybody needs Face ID, an LED display and 740 cameras – this is a device for those who want an iPhone that can do the basics, and do them fast.

On the design front, the new iPhone SE is available in black, white and (PRODUCT)RED. The white model, however, appears to have the same black front as the other models – so it seems the device marks the end of white-fronted iPhones. Preorders begin tomorrow, and at $399, it's the cheapest iPhone since the original SE. We just can't help but wish the form factor was as small as the price.

Want to grab the original iPhone SE while you still can? Check out the best offers below.