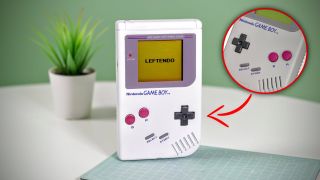 An industrious YouTuber has created a left-handed Game Boy using super glue, toilet paper and some car body filler – plus a traditional Game Boy, of course. Yes, you did just read that. Elliot Coll shared the process to his YouTube account, and, to date, it has amassed over 50 thousand views.

Though it's fair to say the world is mostly set up with right-handed people in mind (scissors, tools and kitchen implements are a particular problem), Coll himself admits that this may have been pointless exercise as it isn't clear if the Game Boy was really an issue for lefties in the first place. But we sure salute the design initiative, and observing the, let's say, alternative process is fascinating. And we're not alone in our admiration, with many users on reddit asking for Coll to now create an in-depth tutorial so they can make their own.

Want to make your own design video? You'll need the best laptops for video editing, as well as the best video editing apps in 2020.

Coll's video (above), entitled 'I made a left-handed Game Boy for no reason' (part of a series on his YouTube channel of 'for no good reason' design posts) shares the whirlwind of a process. In an entertaining series of steps straight out of 90s TV show, It'll Never Work?, the inventor took apart a Game Boy, swapping the controls and securing them in the opposite openings (that's where the toilet roll and super glue came in), then filling the gaps with car body filler (innovative, right?). The board was then reprogrammed and soldered copper tape to traces of the buttons to make them work as they should.

The left-handed Game Boy, which would fit right in at Ned Flanders' Leftorium, has attracted attention on Reddit, with comments ranging from "I am a lefty. I hate everything about this", to "This is great! Gonna need a full mirrored system at some point Elliot!".

As part of his 'I designed for no good reason' project, Coll has also redesigned the Game Boy to create an extra tall console, and one with two screens. While his imagination knows no bounds, and we love the design nouse, Coll admits his super-fun design 'fixes' don't really end up improving on the original – much like this video game logo 'fixed' by a fan recently, which left designers pretty confused.