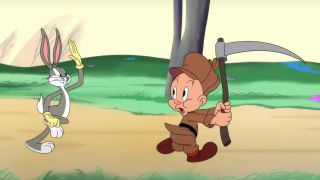 A brand new series of Looney Tunes has begun airing on HBO MAX, with new episodes designed to capture the look and feel of the well-loved originals. But while classic characters such as Bugs Bunny and Elmer Fudd have returned, one detail hasn't survived the transition to streaming in 2020 – Elmer Fudd's gun.

In fact, there are no guns whatsoever in the new series. "We're not doing guns," executive producer Peter Browngardt told the New York Times. That means along with Elmer Fudd's famous shotgun, Yosemite Sam's pistols won't make the cut either. Whether these weapons are part of the characters themselves is up to you (although our character design guide does prove that it's possible to design an iconic character sans guns).

While guns might be disappearing, less realistic forms of violence will remain. "We can do cartoony violence," Browngardt told the Times. "TNT, the Acme stuff." (Acme is the cartoons' fictional corporation whose products often catastrophically backfire). With the show pretty much entirely based on animated characters fighting one another, we're unsurprised to hear that there'll still be some, you know, fighting.

Elmer fudd without his gun, is like yosemite sam without his moustache pic.twitter.com/IfaFEmDYm2June 7, 2020

Still, it seems explosive TNT isn't enough for some people. Many fans were outraged to hear of Elmer Fudd's farewell to arms. "Sam and Elmer Fudd are nothing without their trademark weapons" one Twitter user argued, while another (above) claimed the missing gun was like Yosemite Sam losing his moustache.

So, what has Elmer's gun been replaced with? A giant scythe. In some ways, you could argue that a huge, sharp scythe is just as terrifying as a gun – but it's probably worth remembering that, while gun culture is an actual thing, as far as we're aware, scythe crime isn't rife.

Do you guys SERIOUSLY care whether or not Elmer Fudd has a gun in our shorts? You know how many gags we can do with guns? Fairly few. And the best were already done by the old guys. It's limiting. It was never about the gun, it was about Elmer's flawed, challenged masculinity.June 7, 2020

One Looney Tunes artist recently clapped back (above) at those outraged, claiming that the potential for gun jokes is limited, and "the old guys" already had them covered. Michael Ruocco also took the opportunity to explain the decision: "Our show started production in late 2017, early 2018. Right on the heels of a record number of mass shootings." Whatever your views on the removal of the guns, it's refreshing to hear that the team are using it as an opportunity to get creative.

If the lack of guns hasn't put you off (and to be honest, we hope it hasn't), you can catch Looney Tunes on HBO Max – but only if you're in the US. If you're not, you could do a lot worse than snapping up a free trial for that other brilliant, brand new streaming service, Disney Plus.