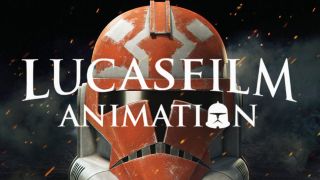 There's nothing like a hot new logo design to get our hearts racing, and all the more so when it's a big name like Lucasfilm, the now Disney-owned production company behind the Star Wars and Indiana Jones films.

Well, that's not quite the case here. The new logo design in question actually belongs to Lucasfilm Animation, best known for the Star Wars: The Clone Wars cartoon that ran from 2008 to 2015, and which has been revived for a final season next year on the Disney+ streaming platform.

The previous Lucasfilm Animation logo wasn't much to write home about, featuring a serif wordmark and an abstract yellow walking figure similar to the one from the LucasArts (the video games wing of the Lucas empire) logo. We're pleased to note that the new logo has ditched the yellow figure, but we're surprised by just how similar it is to the older version; the wordmark looks almost identical.

The big difference, of course, plays on Lucasfilm Animation's biggest success: The Clone Wars. And it does this by replacing the 'O' in 'Animation' with a stylised helmet that'll look instantly familiar to everyone who's seen a Star Wars, ever.

It's a peculiar choice. That helmet doesn't look especially O-shaped; in fact we think it looks more like an A than an O. We reckon it would have looked better if the helmet had been put in place of the second 'A' in 'Animation', as it would look slightly less incongruous and also positioned in the centre of the logo rather than off to one side. But hey, we're sure that the Lucasfilm designers know best.

The new Lucasfilm Animation logo has yet to be officially unveiled; the news about it comes courtesy of Blast, which found the details in a Disney trademark filing from 5 September. The filing describes the logo as, "a stylized word LUCASFILM above the stylized word ANIMATION, with the O of ANIMATION depicting a helmet", and it's accompanied by the image shown above. What isn't clear, though, is whether the image is the finished version of the logo, or a reference image included for reference purposes.

Given the typographic similarity between the new and old logos, we're inclined to believe that this isn't actually the final logo, and that when Lucasfilm Animation reveals the finished version it'll look a little more inspiring than this version.