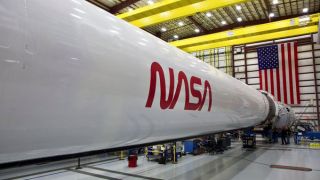 What's the big deal with the worm? Well, the logotype known as the worm was used between 1975 and 1992, and is much-loved for its clean and sleek forms, although it was quite controversial when it was initially brought in (read more in our NASA logo piece, or see our logo design guide for more on logos in general). After 1992, the logo known as the 'meatball', which was the original NASA logo, was brought back. But could this new appearance of the worm mark a wider change for the NASA logo?

In short, the answer is yes. "There's a good chance you'll see the logo featured in other official ways on the mission and in the future," says NASA on its website announcement, entitled 'the worm is back'.

"It seems the worm logo wasn't really retired, it was just resting up for the next chapter of space exploration."

So now we know. And we can't help but wonder if this departure from the meatball has anything to do with the rebranding of the Space Force logo, which was more in the style of the meatball (and some suggested, Star Trek). Is NASA trying to distance itself from the Space Force?

Much as I appreciate the history and symbology of "the meatball" logo, "the worm" logo has always been "NASA" for me. Grew up in the very late '60's and through the '70's, so that makes sense, I suppose. Glad to see it making a comeback!April 2, 2020

There were also a lot of gifs, some of them courtesy of NASA.

We look forward to seeing how this develops. To infinity and beyond? No, we mean, one small step for man, one giant leap for worms.