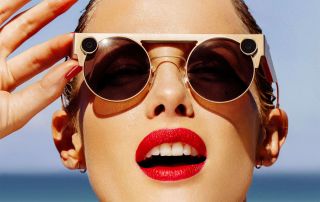 The big Snapchat story this week may be the angry user reaction to the new Snapchat icon, but right now Snap Inc. is more focused on something entirely different: the brand new version of its weird sunglasses/camera combo.

The first two versions of Snap's Spectacles – why on earth couldn't they call them Snaptacles? – haven't exactly set the world on fire. But the latest iteration, Spectacles 3 – or Snaptacl3s as any right-thinking company would have called them – could be the ones to change all that.

Coming in at twice the price of Spectacles 2 (Snap2cles, obviously), the big selling point of Spectacles 3 is that they feature not one but two HD cameras, one mounted on the corner of each lens. And that means you can use them to take 3D photos and shoot 3D video.

By tapping either of the Spectacles' buttons you can shoot up to 60 seconds of video at a time, or by pressing and holding a button you'll take a still photo. The Spectacles also feature a four-microphone array to provide high-fidelity audio for your videos.

Once you've taken your shot you can transfer it wirelessly to your phone and add 3D effects within Snapchat before uploading to your Snapchat account (you can also export straight to your phone's camera roll). And if you want to see your photos and videos in full 3D, Spectacles 3 also come with a Google Cardboard-like 3D viewer that enables you to do just that.

These are by far the coolest-looking version of Spectacles yet; they feature a striking stainless steel frame with circular lenses, and they come in two colour options. There's Carbon – black with a semi-matte finish and high-gloss details, and Mineral, a lighter tone with just a hint of gold.

Spectacles 3 come with 4GB of storage,enough to hold up to 100 videos or 1,200 photos, but you'll need to recharge before you hit that limit. Snap says that one charge will be enough for shooting 70 videos or around 200 photos, and once you're out of juice, simply put your Spectacles in their charging case, which will rejuvenate them in about 75 minutes.

They're available to pre-order now, with delivery promised for the autumn. Whether Snap has got it right this time around remains to be seen; Spectacles 3 certainly look good, and the ability to create 3D video and imagery definitely feels like a bonus, but at $380/£330 for what still feels like something of a gimmicky wearable, this is quite a tough sell.

Colour us intrigued, but not intrigued enough to stump up that much money. If course if they'd called them Snaptacl3s it might be a different matter, but you just can't tell some people. Find out more about Spectacles 3 here.