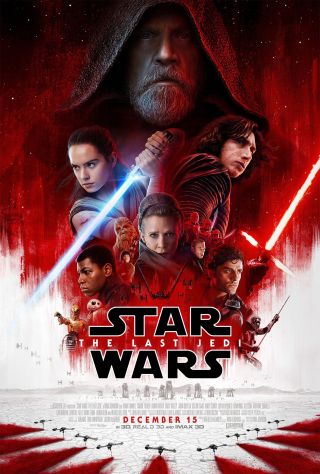 The past 24 hours has been a thrilling time for any Star Wars fans looking forward to Episode 8: The Last Jedi. Not only was the final trailer for the movie unleashed – revealing some exciting spoilers and along the way, so view it (below) with care – but to get everyone even more pumped, Disney also unveiled the official poster, and it's packed with things to talk about.

Created in-house at Disney, the poster's a visual symphony in red, and it suggests that things are likely to get bloody in the second part of the third Star Wars trilogy. That's not a great surprise if the series is following a similar arc to the original trilogy, which would make The Last Jedi equivalent to The Empire Strikes Back, when things got really dark in the Star Wars universe.

Disney's art team has done a fine job of cramming in as many characters as possible as per its favoured glossy composite classic movie poster design. There's Rey (Daisy Ridley), wielding a lightsaber, opposite confused emo bad guy Kylo Ren (Adam Driver) with his overblown weapon.

Towering above them all, though, is a hooded and grim-looking Luke Skywalker (Mark Hamill), and it's an interesting compositional choice. If you go back to the original Star Wars trilogy and look at the poster for The Empire Strikes Back, who will you find in a similar position? None other than arch Star Wars baddie and (spoiler) Luke's dad, Darth Vader.

We're sure it's a deliberate choice on the part of Disney's designers; you'll have to draw your own conclusions as to what it might mean, though. We're sure the trailer might give you a little more food for thought, so if you've missed it so far today, here it is.