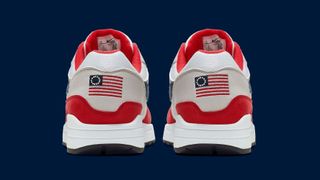 Nike has pulled a new line of Independence Day-themed sneakers following criticism surrounding the inclusion of the 13-star 'Betsy Ross flag'. It has been widely reported that the decision was prompted by a private complaint to Nike from Colin Kaepernick, former NFL quarterback and political activist.

The Air Max 1 USA included the flag, which shows white stars arranged in a circle over a blue background, on their heels. The flag's name relates to the Philadelphia seamstress popularly credited with creating the design at the request of George Washington. The problem is, the historical flag was later adopted for use by the American Nazi party and, in recent years has started cropping up in association with racist ideologies, specifically in relation to the Ku Klux Klan.

The Wall Street Journal has reported that Kaepernick got in touch with Nike to let the company know that he and others consider the flag offensive, and suggest it pull the line.

Nike has not commented specifically on the reasons behind the decision. "Nike has chosen not to release the Air Max 1 Quick Strike Fourth of July as it featured an old version of the American flag," said Nike spokesperson Sandra Carreon-John, in a statement on Tuesday.

The news has been met with impassioned responses, opinion split between those who think the criticism is valid, and those that see it as 'weak' and 'unpatriotic'.

It’s a good thing @Nike only wants to sell sneakers to people who hate the American flag.... @NFL #HappyFourth https://t.co/G6w8vDjvLPJuly 2, 2019

Kaepernick has history with the sportswear giant, having appeared on an ad campaign marking the 30th anniversary of its 'Just Do It' slogan. The ad bore the slogan 'Believe in something. Even if it means sacrificing everything' – a reference to Kaepernick's decision to kneel during the National Anthem in protest against police brutality in the US. The ad sparked a boycott of Nike products, but also earned the company over $6 billion.

The line was due to be released in celebration of Independence Day, but has been officially cancelled, with its release 'indefinitely postponed' and retailers being asked to return any stock they have to Nike, according to Sneaker News.