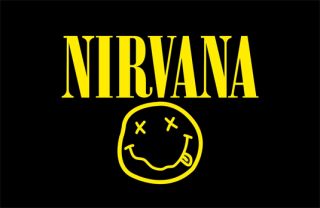 Pioneering '90s rock band Nirvana are suing fashion designer Marc Jacobs over the use of its zonked out smiley face logo. The iconic logo, which has been traced back to a flyer for a gig in 1991, has been slightly altered for its inclusion in a new Marc Jacobs clothing line called Redux Grunge.

This isn't the first time the design has been used by other brands. However, the band's lawyers have decided to take action on the basis that Marc Jacobs apparently did not obtain permission to use the imagery.

With its bold yellow and black colour scheme, scribbly line work and accompanying Onyx font, the Nirvana smiley face has become one of the most recognisable band logos in the world. For the Redux Grunge collection, the logo's original crosses for eyes have been replaced by the designer's initials, MJ, with the name Nirvana swapped out for Heaven.

A behind the scenes look at the Redux Grunge line from the brand itself reveals that Marc Jacobs wanted the collection to channel the spirit of grunge, namely 'the ironic and the perverse, the celebration of the everyday and the extraordinary.' It's an irony apparently lost on Marc Jacobs, whose celebration of an authentic, underground, DIY band will cost shoppers upwards of £110.

"Such expansive usage of Nirvana's Smiley Face logo and various other brand-identifying elements is an 'intentional' effort by Marc Jacobs to 'evoke Nirvana in the minds of [consumers],' per Nirvana and to 'associate the entire 'Bootleg Redux Grunge' collection with Nirvana, one of the founders of the 'Grunge' musical genre, so as to make the 'Grunge' association with the collection more authentic."

The lawsuit also claims that the Redux Grunge items "have caused Nirvana to suffer irreparable injuries" and "threaten to dilute the value of Nirvana's licenses with its licensees for clothing products". Nirvana's legal team have asked for all clothing featuring the MJ logo to be discontinued.

The collision of high fashion and underground music is nothing new. Even back in 1993 Marc Jacobs captured the essence of the age with a flannel-infused range of clothing, much to the amused derision of those at the centre of the scene at the time.

There's an extra level of irony when you consider the anti-design origins of the Nirvana brand. Grant Alden, the typesetter at Pacific Northwest biweekly newspaper called The Rocket, conjured up the blocky yet flowing lettering mostly by accident when he wrote out the band's name with whatever was already installed in the company's machine. Designers who want to know how to price logo design services might be dismayed to learn that Alden charged a mere fifteen bucks for his troubles.

As for the smiley face logo itself, details are less concrete. Nirvana guitarist and frontman Kurt Cobain didn't include drafts of the design in his journals, which is odd as he would iterate the look of his music videos and album covers. However, Nirvana aficionados have long speculated that the musician took his inspiration from a similar cross-eyed smiley face that appeared on the front of a Seattle strip club, The Lusty Lady.