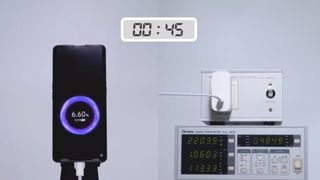 There's nothing more frustrating than running out of phone battery – except, perhaps, having to wait hours for it to charge up again. But Chinese phone manufacturer Oppo has just announced an exciting new charging technology that could seriously reduce how long you'll have to spend waiting by a plug socket.

The company has just announced its new 125w Flash Charge system, which it claims can charge a large smartphone battery in just 20 minutes – in comparison, the iPhone 11 takes over 3 hours to reach 100%. While better battery life would obviously improve any smartphone (even our best camera phones), wildly reduced charging times could be just as useful for creatives on the go.

Here’s a first look at 125W Flash Charge technology in action. It can fully charge a 4,000mAh battery in 20 minutes. 🤯 #FlashForward pic.twitter.com/EWtfGcsL4mJuly 15, 2020

Oppo's technology doesn't simply involve creating a massive charger. The phone battery itself is also optimised for (stupidly) fast charging. In an announcement on Twitter, Oppo explained that the Flash Charge involves "double-6C cells with breakthrough battery ratio". The company hasn't yet announced a phone that will ship with Flash Charge technology.

We hope you’re as excited as us by these flash charging breakthroughs today! 🙌Our aim is to provide users with safe and convenient solutions to keep up with the accelerated 5G rollout worldwide and the increase in high-demand apps such as gaming and video. 🎮 #FlashForward pic.twitter.com/6ehjPhl1iJJuly 15, 2020

What Oppo has announced in terms of hardware is not one, but four new chargers (above). These include the company's first ever wireless charger, the 65W AirVOOC – which the company claims can fully charge a phone in 30 minutes. This is faster than any current wired solution, let alone wireless.

There's currently no word on when Oppo's new chargers, or indeed its Flash Charge technology will become available – but it's certainly a tantalising glimpse of the future of smartphones. For photographers and digital artists on the go, less time charging can only be a good thing. Meanwhile, back in the present day, battery life was one of the highlights of our iPhone 11 Pro review – until Oppo's technology arrives, you could do a lot worse than checking out today's best deals (below).