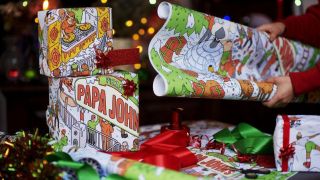 You might think Christmas is magical enough already. The giving of beautifully wrapped gifts spreads joy and love throughout friends and family. Now, imagine adding the mouth-watering scent of pizza to that transaction. Not something we've ever considered before but it could only make it better... right?

Well, turkey will have to take a back seat this year thanks to a festive collaboration between Papa John's and the homeless charity, Crisis. Graphic illustrator Mike Hughes has created a fun and festive pizza-themed range of wrapping paper for the #ChristmasIsBetterShared campaign. (Feeling inspired? Here's our pick of free graphic design software if you fancy making your own themed wrapping paper.)

The wrapping paper comes in two designs, both created by Hughes. The first features bright, bold images of pizza oven igloos, pizza DJ decks and characters indulging in general festive cheer – plus the all-important pizza itself, of course. And the second design turns your gift into a pizza. Okay, not an actual pizza, but it features illustrations of giant pepperoni and cheese. And to top it all off, the paper also wafts the scent of pizza at you.

With wrapping paper that's being sold for £4.99 online by Papa John's, the campaign aims to raise money for Crisis. The drive is backed up by a video advert (below) in which a trio of lonely creatures (a penguin, yeti and snowman) are saved from their Christmas solitude and sadness by the enticing scent of a Papa John's delivery. They follow the delivery and it leads them to a joyful fairground full of people and fun.

Alongside the wrapping paper, Papa John's is selling a range of festive gifts adorned with the characters listed above, and you can even buy a special pizza box when you order a pizza, with all proceeds going to Crisis.

“We’re really proud to be working with Crisis, a charity that aims to eradicate homelessness and provides vital services to people in the UK at one of the hardest times of the year," said Papa John's marketing director, Giles Codd.

"We hope that the money raised will help toward Crisis continuing the fantastic work they do not just at Christmas, but throughout the whole year.”

It's a novel idea that's sure to get attention, and an amusing to raise money for a great cause. Hughes has hit just the right mark with his Where's Wally-style illustrations, too.

Companies often run successful campaigns when they team up with charities for special projects (like the Cadbury's Donate Your Words campaign). And besides the positivity of the connection with charity, such projects are an opportunity to get an alternative perspective on a brand image through new design.