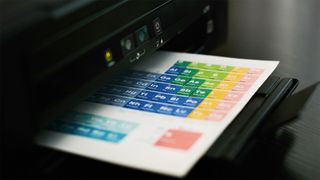 We all remember the periodic table on the wall of the school chemistry lab. For over 100 years the table, developed in the 19th century by Russian scientist Dimitri Mendeleev, has been the accepted representation of the chemical elements.

It's a useful visual tool because it groups the elements according to their predominant properties in a way that makes it easy to understand both the elements and the relationships between them. However as a piece of data visualization it's not without its problems; there's much more to every element than the properties illustrated in the periodic table, and there have been arguments in the scientific community for years over whether the table should be rearranged, and if so, how.

But now there's a compromise that should please everyone from teachers or students who just need a simple visual guide to the elements, through to more serious scientists and researchers who require more some of the more esoteric properties of elements to be on show.

It's the work of Russian design studio Art.Lebedev, and it's addressed the challenge by creating an adaptable version that enables users to set their own properties and create a brand new table based around them.

Art.Lebedev says that there are over 100,000 possible permutations of this customisable table. There are some ready-made versions supplied, such as the classic classroom table, a more complex college table and even a table that shows where each element was discovered, but the real fun lies in the ability to roll your own periodic table in any colour scheme you like, arranged by more characteristics than a non-scientist would think possible.

Once you've constructed the periodic table of your dreams you can download it as a massive print-quality PNG, ideal for turning into a large-scale poster and sticking to the wall, and the whole process is completely free.

If you've ever dreamed of creating your own periodic table - and who knows, maybe discovering relationships between the elements that the scientific establishment had somehow overlooked until now - you can find Art.Lebedev's new version here.