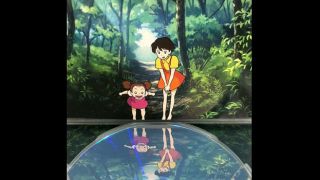 Japanese animation studio, Studio Ghibli, is known for its painstaking attention to detail, and a design for a Blu-ray case for one of its films has attracted plenty of love online. The concept design for My Neighbour Toroto was created by a fan, @panasonynet, and posted to their Twitter (below), and has since taken on a viral quality as it's been shared around the world, often being attributed to the studio.

What makes the design so special? The surface of the Blu-ray disc means that the characters are reflected in it. It looks as if they are peering into a lake and seeing themselves peering back. And as the characters are in the forest surrounded by greenery, it's really not hard to imagine that there would be a lake there. It's one of those backdrops that adds beautifully to the characters' stories (see our character design tips for more pointers on crafting believable creations).

In short, we love it, and we want one (even though we don't have a Blu-ray player). And by the looks of the comments, we're not the only ones.

There was also a flood of positivity over on Reddit, with one commenter saying it was "simple yet perfect". We can't help but agree.

Seeing as this concept is, as far as we know, a concept, and therefore unavailable to purchase, we'll have to be content for now at rewatching the Studio Ghibli back catalogue, a lot of which is now available on Netflix.

And if you get bored of that, then you can always try and make your own animated videos.