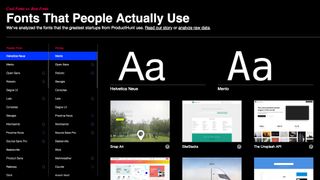 Having picked apart fonts for years over here on Creative Bloq, we're pretty tuned in to the fact that lettering styles can be rather divisive. After all, one designer's fun font is another person's Comic Sans (apologies to all the Comic Sans defenders out there).

We like to think that we've noticed some typography trends this year, but what we really need is some hard data to give us a glimpse into which fonts people are actually using. Luckily that's just what the team at Icons8 have gone and done with its recent study.

The results of this research can be found on the study's straight-talking website, Fonts That People Actually Use. Priding itself on exposing the cool fonts vs. the best fonts, this research explores which fonts are the most popular, what font combinations are the most effective, and whether or not designers actually follow these trends and rules.

To gather its research, Icons8 analysed more than 900 websites from top Product Hunt startups. By checking the choice of typeface and font combinations on these sites, Icons8 made interesting and occasionally unpredictable findings.

As it happens, Google Fonts lead the way in terms of popularity, font names are often misspelt, and our old friend Comic Sans is nowhere to be seen (apologies again to all the Comic Sans defenders out there.)

As well as finding thousands of different typefaces, Fonts That People Actually Use also narrowed down the top 50 styles and the 50 most common font pairings. The styles that proved most popular include Open Sans, Roboto, Lato, and Montserrat.

With a wealth of raw data to analyse, Icons8's findings are sure to appeal to type fans and data junkies alike.