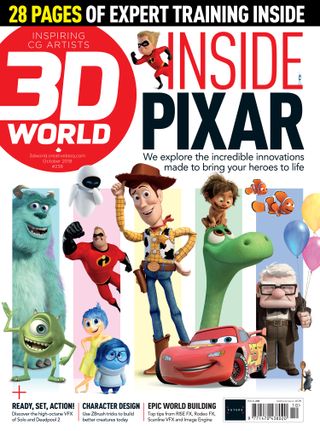 Have you ever wondered what it might be like to work at Pixar? Or see what goes on behind the scenes? Well, wonder no more, friends, as the latest issue of 3D World reveals all. Discover the secrets to the studio's success, covering some of its most popular feature films, from A Bug's Life to The Incredibles 2.

And if that wasn't enough excitement for you, issue 238 also takes an in-depth look at the art of the action sequence, revealing the tools and tricks used on Solo: A Star Wars Story and Deadpool 2.

If it's more practical content you're after, the 3D World team has you covered there too. This issue is packed with training, including tutorials to help you master the creation of clothes and props for iClone, and build a tracked visual effects sequence in Apple Motion. There's also the regular Q&A section to help you solve your CG problems and you'll find reviews of the latest tools, from Vue to Oculus Medium.

Here's more detail on what you can expect in this issue...

It's the one you've all been waiting for. Go behind the scenes of the world's most infamous animation studio as we talk to the artists making the movies at Pixar. I

In this action-packed feature, Trevor Hogg encounters a sarcastic mercenary and a galactic smuggler while uncovering the action-scene secrets of Deadpool 2
and Solo: A Star Wars Story.

This guide will take you through the process of creating realistic apparel for your characters .

Who says crocodiles can’t be ballerinas? Well, we’re about to make that dream come true with the power of ZBrush.

Ian Failes explores the building of natural worlds with VFX studios behind some of the biggest recent film and television projects.