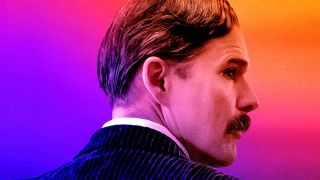 2020 hasn't been a great year for movies, with cinemas across the world forced to close during the coronavirus pandemic. Thanks to streaming services though, a few new films are still managing to sneak out this year, including an upcoming biopic of inventor Nikola Tesla. The film's poster has just been revealed – and we have some questions.

Directed by Michael Almerevda, Tesla follows the inventor as he fights an uphill battle to bring his revolutionary electrical system to fruition during the 1800s. The film is billed as a biographical drama – but based on the poster, it could easily be a 1980s musical fantasy. Many of the best print ads contain several messages, but this has left us particularly baffled.

The poster features a close-up of Tesla (played by Ethan Hawke) slapped over a colour gradient that appears to have been taken straight from the Instagram logo – not very 19th Century. But even more confusing is the film's logo. The decorative, neon title treatment looks straight out of the 1980s (Labyrinth, anyone?). Completing the tonal dissonance is Hawke's dour expression, which is at odds with the vibrant colour around him. What genre is this film again?

Reddit users were quick to make their thoughts known. "This poster looks terrible. It makes it look like Tesla is 1908’s top DJ," one comments. Another eloquently sums up our thoughts: "For such an important figure in history, whose fate is so tragic, I find the colours to be quite off-putting. The appropriate complexity and sophistication of design necessary to convey the monumental achievements of this man are simply not there. Is it a musical perhaps? The font sure is... fun?"

It could well be that the confusion is deliberate. In a review from Sundance Festival back in January, The Verge calls Tesla "a weird, fourth-wall-breaking take on the internet’s favourite inventor". Still, first impressions are everything – and even if the film is weirder than you might expect a 19th Century biopic to be, the poster is simply confusing.

We'll be able to tell how appropriately the poster fits the film when Tesla is released to VOD services on August 21. In the meantime, the marketing team might want to check out some of our brilliant Photoshop tutorials.