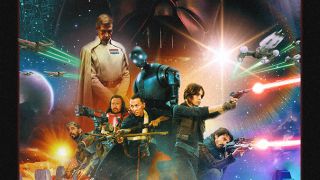 There's fewer than two months until the cinematic release of Rogue One: A Star Wars story, and fans are getting creative with their excitement. With new trailers and official posters steadily dropping online, we're starting to get a good idea of what to expect from the hotly anticipated film, and illustrators are using some pretty amazing creative licence to bring the limited source material to life.

To celebrate some of the amazing efforts emerging from the Star Wars fan community, we've gathered together some of the best posters designed by devotees of the galactic saga.

While some rely mainly o the characters, other posters have more experimental designs that focus on objects, symbols, and the title of the film itself. So if you're itching to see the film, but you're trying to avoid spoilers from official channels, this is an ideal way to satisfy your cravings for all things Rogue One.