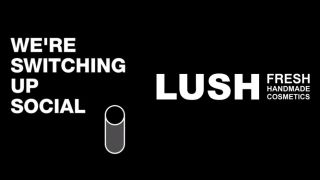 If you've ever needed to pick up a bath bomb to help you relax after a long day at work, chances are you've stumbled into Lush at some point. The cosmetics retailer has become well known for its personable staff and ethical foundations, and in its latest development, Lush UK is combining these ideals by stepping away from social media.

Announced last week, Lush UK revealed that it's 'switching up social' in response to social media algorithms making it harder for people to speak to each other directly. This is good news if you're after a more human experience while shopping for body butter, bad news if images of colourful conditioners were the only thing that made logging into your Twitter account worthwhile.

The account name Lush UK has closed on Facebook, Twitter and Instagram along with Lush Kitchen, Lush Times, Lush Life, Soapbox and Gorilla. However, the American arm of the chain doesn't appear to be following suit.

We're switching up social.Increasingly, social media is making it harder and harder for us to talk to each other directly. We are tired of fighting with algorithms, and we do not want to pay to appear in your newsfeed. pic.twitter.com/nJUzG0lhamApril 8, 2019

The wording of the announcement is worth looking at. Like the rest of Lush's branding, from its in-store displays to its named-and-dated packaging designs, the statement is in the brand's optimistic, chirpy voice. It's not binning social, it's 'switching up social'. As far as copywriting goes, it's a masterpiece. But why is Lush UK doing it at all?

In some follow-up tweets, Lush UK makes the case that its conversation needs to be put back to the community, and it just doesn't see social media accounts as facilitating that goal. We can see its point. Social media, to Lush UK, could be seen as little more than a middle man, one which prioritises its own algorithmic interests.

Why should Lush UK pay through the nose for promotion on a site that isn't in line with its interests, when instead it could put its resources to better use by establishing influencers online? Influencers that are easy to connect to and talk directly to customers.

We’re a community and we always have been. We believe we can make more noise using all of our voices across the globe because when we do we drive change, challenge norms and create a cosmetic revolution. We want social to be more about passions and less about likes.April 8, 2019

Understandably, the move has caused some concern amongst its millions of followers. Some have cried "nonsense" at the decision, while others have pointed out that such a big brand has massive potential to leverage its social media presence however it likes.

As Lush maintains though, this isn't the end, it's only the beginning of something new (namely, announcing products via newsletters and website posts, and hiring customer care staff.)

This isn’t the end, it’s just the start of something new.#LushCommunity - see you there.April 8, 2019

This isn't the only surprising social media decision we've seen recently. Both Carlsberg and KFC have been spotted promoting themselves on Twitter by sharing tweets from people who were less than satisfied with their products. And while KFC did this to whip up hype about the release of fries with a new recipe, it remains to be seen what Carlsberg is up to. Maybe a disgruntled social media manager is going out in style?

Regardless, these are prime examples of how brands can bend social media to meet their needs, not the other way round. Just because an algorithm has a strong influence over what we see and read, that doesn't need to be the whole story. Companies can be cheeky or compassionate and stay true to their values at the same time.

Could your brand benefit from a social media detox? Or is it too much of a staple of your marketing plan? Not all companies have the reach and renown of Lush UK, so stepping away from the likes of Twitter and Facebook could be a risky venture. However, if your business is propped up by strong values, it could be worth looking at how to use social media more creatively.