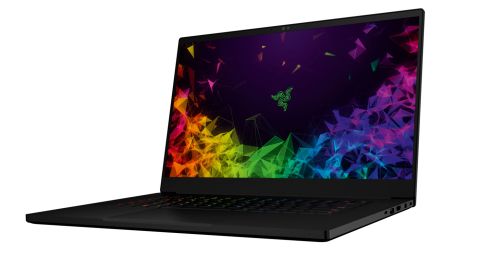 It may be expensive, but the Razer Blade 15 Advanced Model has plenty to tempt 3D artists

The Razer Blade Advanced Model is a slight departure from the norm for Razer.

Since its earliest beginnings, Razer has consistently focused on products with high-end features and performance, slanted slightly more towards gaming than creative work, but that has changed with this machine.

Here, we examine whether this machine could be one of the most powerful laptops on the market, in particular looking at its capability for 3D work. Here's what we thought...

With a solid black unibody aluminium case, the latest Razer Blade feels solid, even though it’s still thin. Both the keyboard and touchpad are noticeably roomy and aside from two speakers to the sides of the keyboard, it’s also a stark, highly minimalist design, which we consider superior to the gaming-oriented flashy LED design employed by other manufacturers.

Its internal specification uses the same powerful combination of a GeForce RTX 2080 and Intel Core i7-9750H that we’ve seen on the other two laptops here. It also has
a brilliant 15.6-inch OLED touch-sensitive display that is colour accurate with 100% DCI-P3 coverage.

Ports and connectivity are fairly generous too, with three USB-A ports, a USB-C/Thunderbolt 3 port, DisplayPort and HDMI, but no built-in Ethernet port though, so you’ll need a dongle for that. Support for the new WiFi 6 standard is a bonus.

However in the test model we received, SSD storage was limited to 512GB and memory to 16GB, which seems disappointedly stingy on a laptop that costs thousands. It appears that if you want that, you’ll need to invest in a different Razer laptop.

On Razer’s website, there seems to be quite a confusing range of configurations. Even though it’s more expensive, the newly announced silver Razer Blade Studio edition is probably better all-round value, as it not only nets you a Quadro RTX 5000  rather than the GeForce, you also get more memory and a larger SSD.

Razer also sells Blade 15 laptops that have less powerful graphics cards, and some that omit the OLED colour-accurate display and instead offer either a 120Hz or 240Hz refresh rate. This is a fantastic feature for gaming, but for designers the colour-accurate option is arguably more useful. Also we noticed WiFi 6 is only available on the more high-end models.

An extra investment you can opt for is Razer’s official Thunderbolt external graphics card array. While we didn’t get a chance to test this, it lets you connect a second desktop graphics card over Thunderbolt for a 3D performance boost. These kind of products are quite new and very pricey, and experiences with them can vary.

In our benchmarks, the Razer Blade did not disappoint. In most of the tests it was extremely close, but certain results came out up to 10 per cent faster. Unlike the other laptops on test, even when running 3D benchmarks, it also remained silent.

We’re torn over the Razer Blade Advanced Model. It’s definitely one of our favourite laptops for 3D work, but given that it’s expensive, and has relatively weedy storage compared to its competitors, it’s also arguably worse value. Saying that, you may pay slightly more for the Razer brand, but that also means better materials, and quieter operation. It's a tough one.

It may be expensive, but the Razer Blade 15 Advanced Model has plenty to tempt 3D artists