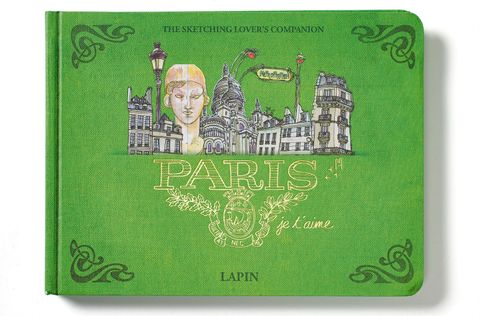 Lapin's bijou Parisian tome is delightful and thoroughly inessential, but a lovely thing to own.

Lapin, a French illustrator and artist based in Barcelona, is a hero of the urban sketching movement and he's been busy of late. Paris Je T'aime is one of three sketchbooks he produced in 2016, alongside Barcelona: Modernisme, Beyond Gaudí and Barcelona: Original.

This one sees him return to his home country, where he spent a month observing, conversing with people and sketching on the streets of the French capital. If the idea isn't original, it's in Lapin's highly original sketching style that the appeal lies.

Using a black ink pen as his main drawing tool, he sketches in old accountant books and adds subdued colours with watercolour pens. It's an unusual approach and the result is a form of amiable art that borders on twee, yet retains an attractive authenticity.

Lapin's quirky artworks are threaded together in this bijou book by handwritten tales of his travels through Paris, from artist's squats to the Eiffel Tower, Aligne Market to the Moulin Rouge, and beyond.

In all honesty, we're not sure who the audience is for this, but we are sure of one thing: we like it very much.

This article originally appeared in ImagineFX issue 143; buy it here!

Lapin's bijou Parisian tome is delightful and thoroughly inessential, but a lovely thing to own.